Local time in Shkoder is now 06:52 AM (Saturday) . The local timezone is named " Europe/Tirane " with a UTC offset of 1 hours. Depending on your flexibility, these larger cities might be interesting for you: Timişoara, Sofia, Peshkopi, Prizren, and Pristina. When in this area, you might want to check out Timişoara . We found some clip posted online . Scroll down to see the most favourite one or select the video collection in the navigation. Are you looking for some initial hints on what might be interesting in Shkoder ? We have collected some references on our attractions page.

The Ebu Beker Mosque (Albanian: Xhamia Ebu Beker) is a mosque in Shkodër, in northwestern Albania. The mosque was historically important in the scholarly learning of the city and attracted notable Islamic scholars and theologians.

Nativity of Christ Orthodox Cathedral of Shkodrës is a modern orthodox cathedral in the city of Shkodër in northwestern Albania.

Loro Boriçi Stadium is a multi-purpose stadium in Shkodër, Albania. It is currently used mostly for football matches and is the home ground of Vllaznia Shkodër. The stadium holds 16,000 spectators and was reconstructed in 2001. It is named in honour of Loro Boriçi, famous player in 1940s and 1950s. It is also the second largest stadium in Albania behind the Qemal Stafa stadium in Tirana.

Jordan Misja High School is a public high school located in the major northern city of Shkodra, Albania. Established in 1957, it is one of the city's oldest public institutions of secondary education.

Shkodër Cathedral (Albanian: Katedralja e Shkodrës), also known as St Stephen's Catholic Cathedral or Kisha e Madhe (the Great Church) is a cathedral in the city of Shkodër in northwestern Albania. The Roman Catholic cathedral is dedicated to Saint Stephen. During the Siege of Scutari (1912–1913) the cathedral was damaged by the Montenegrin army, particularly the south east side, causing fire in the bell tower. The Cathedral was closed in 1967 and reopened in 1990. 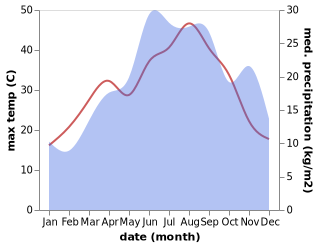