Local time in Laghouat is now 04:29 PM (Monday) . The local timezone is named " Africa/Algiers " with a UTC offset of 1 hours. Depending on your flexibility, these larger cities might be interesting for you: Tissemsilt, Tiaret, Oran, M'Sila, and Mostaganem. When in this area, you might want to check out Tissemsilt . We found some clip posted online . Scroll down to see the most favourite one or select the video collection in the navigation. Are you looking for some initial hints on what might be interesting in Laghouat ? We have collected some references on our attractions page.

Laghouat is the capital city of the Laghouat Province, Algeria, 400 km south of the Algerian capital Algiers. As of 2005, the population of the city was 126,291 inhabitants. Nearby, in Hassi R'Mel, there is the largest natural gas reserve in Africa. The city was founded in the 11th Century. In 1852, the French took over the city. Since 1974, it is an Algerian province. Laghwat town in Saharan Tell Atlas is an oasis on the north edge of the Sahara Desert.

Laghouat District is a district of Laghouat Province, Algeria. Laghouat (Laghwat) is an Algerian town, About 400 km from Algiers.

L'Mekrareg Airport (also known as Laghouat Airport, is an airport near Laghouat, Algeria.

El Assafia is a town and commune in Laghouat Province, Algeria. According to the 1998 census it has a population of 4,389. 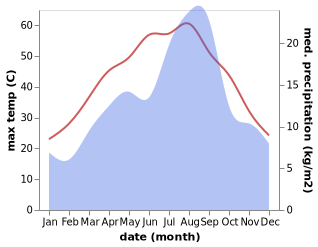