Time in Dobrich is now 05:36 PM (Monday) . The local timezone is named " Europe/Sofia " with a UTC offset of 2 hours. Depending on your budget, these more prominent places might be interesting for you: Chişinău, Iaşi, Constanţa, Bucharest, and Odessa. Being here already, consider visiting Chişinău . We collected some hobby film on the internet . Scroll down to see the most favourite one or select the video collection in the navigation. Check out our recomendations for Dobrich ? We have collected some references on our attractions page.

Day 8 of the 18 day long trip. Discussing some arising challenges and how we are overcoming them ..

Winter in Dobrich, Bulgaria 2012. The day before the End. There was no snow during all December, until 19th. Now roads are closed, buses are stopped and flights are canceled. ..

The battle of Dobrich, also known as the battle of Bazargic or the Dobrich epopee, took place between 5 and 7 September 1916 between the armies of Bulgaria and Romania. Despite being outnumbered, the Bulgarian Third Army was victorious and took Southern Dobruja, pushing the Russian and Romanian forces further north and defeating them once again at the Lake Oltina - Kara Omer - Mangalia line.

Dobrich is the ninth most populated city in Bulgaria, the administrative centre of Dobrich Province and the capital of the region of Southern Dobrudzha. It is located in the northeastern part of the country, 30 km west of the Bulgarian Black Sea Coast, not far from resorts such as Albena, Balchik, and Golden Sands. Dobrich Knoll on Livingston Island in the South Shetland Islands, Antarctica is named after Dobrich. A point of interest is the Dobrich TV Tower.

Druzhba Stadium was built in the end of the 1950s with volunteers' money. The amount of money gifted was about 87 million BGN. The stadium was officially opened on September 25, 1960. The first official match played was between the teams of PFC Dobrudzha Dobrich and the Romanian side FC Progresul Bucureşti, which ended with 0:1 loss for the hosts. The capacity of the stadium is 12 500 seats.

Dobrich TV Tower is a 146 metres tall TV tower built of reinforced concrete near Dobrich in Bulgaria. Dobrich TV Tower, which was designed by Petar Andreev, was completed in 1979 and has an observation deck open for tourists. It is also remarkable by its design. 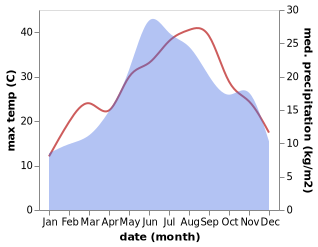