Local time in Qina is now 02:14 PM (Friday) . The local timezone is named " Africa/Cairo " with a UTC offset of 2 hours. Depending on your flexibility, these larger cities might be interesting for you: Suhaj, Naj' al Bashshariyah, Naj' al 'Arab, Naj' Jibril, and Naj' al Kawm. When in this area, you might want to check out Suhaj . We found some clip posted online . Scroll down to see the most favourite one or select the video collection in the navigation. Are you looking for some initial hints on what might be interesting in Qina ? We have collected some references on our attractions page.

Train coming into the Qena station

Qena is a city in Upper Egypt, and the capital of the Qena Governorate. Situated on the east bank of the Nile, it was known as Kaine during the Greco-Roman period and as Cainepolis in antiquity.

Dendera Temple complex, (19th century English spelling in most sources, including Belzoni was Tentyra). located about 2.5 km south-east of Dendera, Egypt. It is one of the best-preserved temple complexes in Egypt. The area was used as the sixth Nome of Upper Egypt, south of Abydos.

The sculptured Dendera zodiac (or Denderah zodiac) is a widely known Egyptian bas-relief from the ceiling of the pronaos of a chapel dedicated to Osiris in the Hathor temple at Dendera, containing images of Taurus and the Libra (the scales). This chapel was begun in the late Ptolemaic period; its pronaos was added by the emperor Tiberius.

Dendera is a small town in Egypt situated on the west bank of the Nile, about 5 km south of Qena, on the opposite side of the river. It is located approximately 60 kinometers north of Luxor.

Qift is a small town in the Qena Governorate of Egypt about 43 km north of Luxor, on the east bank of the Nile. 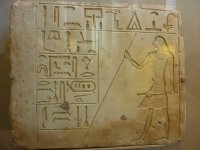 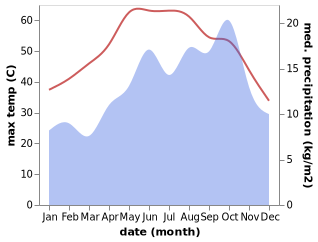