Current time in Suhaj is now 10:23 PM (Friday) . The local timezone is named " Africa/Cairo " with a UTC offset of 2 hours. Depending on the availability of means of transportation, these more prominent locations might be interesting for you: Urban Bani Wasil, Saqultah wa al 'Arab, Rawafi' al 'Isawiyah, Qina, and Qilfaw. Since you are here already, make sure to check out Urban Bani Wasil . We saw some video on the web . Scroll down to see the most favourite one or select the video collection in the navigation. Where to go and what to see in Suhaj ? We have collected some references on our attractions page.

View out the Window of the Overnight Train - Cairo to Luxor

This is the view out the window of the Overnight Train from Cairo to Luxor. It was taken at about 6:15 am about 30 minutes after sunrise. ..

The Sidi Arif Mosque (also known as Masjid Al-Arif Bellah) is one of the largest mosques in Sohag Governorate. It was built for the first time at the 14th century and was reconstructed several times; the last one was in 1968 and being renewed in 1998 for the last time. At the corners of the facade are two minarets, and the roof is crowned by a dome. Inside the five-naves mosque the bases of the piers and the walls were lined with red granite.

Athribis, also known to the ancient Greeks as Triphieion or Tripheion, and to the ancient Egyptians as Hut-Repyt, was an ancient city of Egypt, in the Panopolite nome. The modern village of Wannina in the Sohag Governorate is situated here. It is located some 10 km southwest of the city of Akhmim, on the west bank of the Nile.

Akhmim is a city in the Sohag Governorate of Upper Egypt. Referred to by the ancient Greeks as Khemmis, Chemmis and Panopolis, it is located on the east bank of the Nile, 4 miles to the northeast of Sohag. 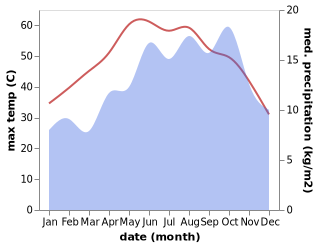