Current time in Viseu is now 06:53 PM (Friday) . The local timezone is named " Europe/Lisbon " with a UTC offset of 0 hours. Depending on the availability of means of transportation, these more prominent locations might be interesting for you: Lisbon, Leiria, Valverde, Torredeita, and Senhorim. Since you are here already, make sure to check out Lisbon . We encountered some video on the web . Scroll down to see the most favourite one or select the video collection in the navigation. Where to go and what to see in Viseu ? We have collected some references on our attractions page.

This is the first video from our trip to Viseu, my hometown in Portugal between 1999 and 2006. It is the regional capital of Beira Alta and is located north of Lisboa and south of Porto, in the interi ..

Every Tuesday, the market - a feira - comes to Viseu, as it comes to every Portuguese city and town around the country. There you can buy anything you need for your living, from food to clothing, tool ..

More from Viseu, my hometown during 7 years, from 1999 to 2006. This is from a visit there this summer, 2009. Let us have a walk through the streets, starting from the Pretexto bookshop, café and wine ..

Aside from a wide variety of restaurants - and churches - for every taste, the city also has some fine parks, and among them Fontelo is the queen. Located by the football stadium - actually, the stadi ..

The Grão Vasco Museum (Museu de Grão Vasco) is an art museum located in the city of Viseu, in Portugal. The museum is named after one of the most important Portuguese painters of the Renaissance, Vasco Fernandes (also known as the Grão Vasco), who had his workshop in Viseu. The museum, founded in 1916, occupies the building of the old Seminary, located beside Viseu Cathedral.

Viseu Cathedral is the bishopric seat of the city of Viseu, in Portugal. The church started being built in the 12th century and is the most important historical monument of the town. It is currently a mix of architectural styles, specially from the Manueline, Renaissance and Mannerist periods. The cathedral is located on a large and harmonious square, beside the old Bishop's Palace and in front of the Misericórdia Church of Viseu.

The District of Viseu is located in the Central Inland of Portugal, the District Capital is the city of Viseu.

Dão-Lafões is a Portuguese NUTS III sub-region in the Centro Region. It is located in central Portugal, and has an approximate area of 3,483 km² and 286,315 inhabitants. Its largest city is Viseu (with approx. 50,000 inhabitants).

Abraveses is a town in Viseu, Portugal. 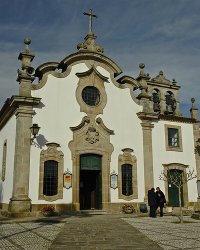 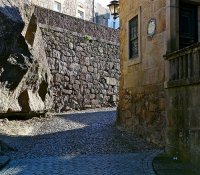