Time in Vologda is now 08:13 AM (Tuesday) . The local timezone is named " Europe/Moscow " with a UTC offset of 4 hours. Depending on your travel resources, these more prominent places might be interesting for you: Yaskino, Yaroslavl', Volokolamsk, Vologda, and Vladimir. Being here already, consider visiting Yaskino . We collected some hobby film on the internet . Scroll down to see the most favourite one or select the video collection in the navigation. Check out our recommendations for Vologda ? We have collected some references on our attractions page.

Saint Sophia Cathedral is a Russian Orthodox cathedral, the oldest surviving building in the city of Vologda. It was constructed between 1568 and 1570 under personal supervision of Tsar Ivan the Terrible in the period when Vologda was the capital of the Oprichnina lands in Russia, and completed in 1587. The cathedral is located on the right bank of the Vologda River, just outside the former fortress known as the Vologda Kremlin.

More reading: Wikipedia Article
Located at 59.22 39.88 (Lat./Long.); Less than 1 km away
Tags: 1796 disestablishments, States and territories established in 1780, Viceroyalties of the Russian Empire

The Gorne-Uspensky Convent (or simply Gorny Convent is a monastery in Vologda, Russia. It was active between 1590 and 1924. It is situated in the historic part of the town, named Upper Posad, in the area bounded by the Zavrazhskaya, Burmaginy and Mokhov streets. Several of its buildings are preserved or have been restored, while others are partially or completely in ruins. It comprises complex of monuments that have been protected by the federal government. 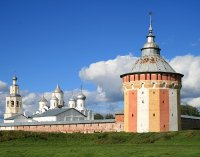 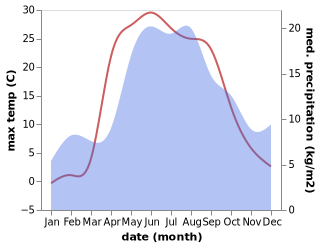