Ribnica in the region of Ribnica with its 3,482 inhabitants is a town in Slovenia - some 24 mi or ( 39 km ) South-East of Ljubljana , the country's capital city .

Current time in Ribnica is now 12:48 PM (Tuesday) . The local timezone is named " Europe/Ljubljana " with a UTC offset of 1 hours. Depending on the availability of means of transportation, these more prominent locations might be interesting for you: Klagenfurt, Munich, Bratislava, Venice, and Trieste. Since you are here already, make sure to check out Klagenfurt . We encountered some video on the web . Scroll down to see the most favourite one or select the video collection in the navigation. Where to go and what to see in Ribnica ? We have collected some references on our attractions page.

Hungarian Feast - featuring EVA BODNAR & the SECRET PAPRIKA - took place in the studio KulturAXE in Vienna at the opening of the exhibition BBB (Budapest, Bratislava, Bécs) on 10th December 2004. An e ..

Preparation for the battle. en.wikipedia.org www.zlate-ostroge.org ..

This article is about the medieval region in present-day southern Slovenia.

More reading: Wikipedia Article
Located at 45.80 14.83 (Lat./Long.); Less than 11 km away
Tags: History of Carniola, Marches of the Holy Roman Empire, Medieval history of Slovenia, States and territories established in 960

Prezid is a village in Croatia. It is connected by the D32 highway.

Čabar is a town in the Primorje-Gorski Kotar County in western Croatia. 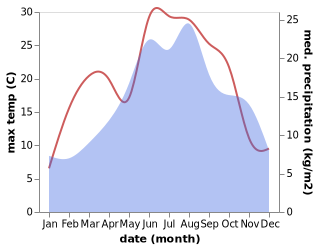