Current time in Korçë is now 08:37 AM (Tuesday) . The local timezone is named " Europe/Tirane " with a UTC offset of 1 hours. Depending on the availability of means of transportation, these more prominent locations might be interesting for you: Sarandë, Sofia, Voskop, Turan i Siperme, and Ravonik. Since you are here already, make sure to check out Sarandë . We saw some video on the web . Scroll down to see the most favourite one or select the video collection in the navigation. Where to go and what to see in Korçë ? We have collected some references on our attractions page.

The Resurrection Cathedral (Albanian: Katedralja “Ngjallja e Krishtit”) is the main orthodox church in Korçë, Albania. It is painted in pink, blue and brown. The cathedral was built in 1992.

The French Military Cemetery is a large cemetery located in Korçë, Albania. It's located near Rinia Park. The French military cemetery has 640 crosses. They mark the graves of the French soldiers that died here in the conflicts of the First World War. 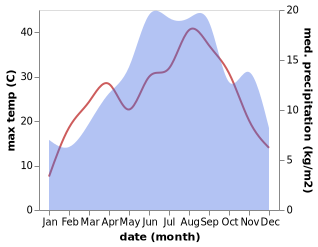