Delve into Mongar in Bhutan

Current time in Mongar is now 01:46 PM (Thursday) . The local timezone is named " Asia/Thimphu " with a UTC offset of 6 hours. Depending on your travel modalities, these larger destinations might be interesting for you: Dhaka, Trongsa, Tongla Kenga, Thimphu, and Trashi Yangtse. While being here, make sure to check out Dhaka . We encountered some video on the web . Scroll down to see the most favourite one or select the video collection in the navigation. Are you curious about the possible sightsseing spots and facts in Mongar ? We have collected some references on our attractions page.

Preview of Dunnsage's blog at TravelPod. Read the full blog here: www.travelpod.com This blog preview was made by TravelPod using the TripAdvisor™ TripWow slideshow creator. Learn more about these vid ..

Keep your skirt down!

girls chasing a boy during archery game in eastern bhutan. ..

Lingmethang is a settlement in the eastern Bhutan. It is located in Mongar District, to the west of Mongar and close to the village of Gyalpozhing. It is green and very beautiful valley.

Mongar District is one of the 20 dzongkhags (districts) comprising Bhutan. Mongar is the fastest-developing dzongkhag in eastern Bhutan. A regional hospital has been constructed and the region is bustling with many economic activities. Mongar is noted for its lemon grass, a plant that can be used to produce an essential oil. It also has a hydro power plant on the Kuri Chhu river.

The 2009 Bhutan earthquake was a 6.1 magnitude earthquake that occurred at 14:53 local time, 08:53 UTC, on September 21, 2009 in the eastern region of Bhutan. The epicenter was situated at 180 kilometres east of the capital Thimphu, in Mongar District. However, Bangladesh and India also felt it, with buildings in Guwahati, Assam, cracking up. The tremors were felt as far as Tibet. At least eleven people are reported to have been killed—seven in Bhutan, four in India.

Khoma is a settlement in the north of Bhutan. It is located in Lhuntse District. 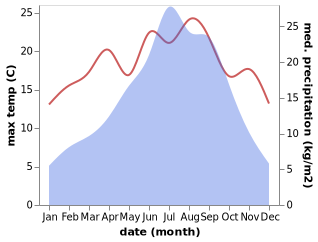