Local time in Paro is now 12:56 AM (Wednesday) . The local timezone is named " Asia/Thimphu " with a UTC offset of 6 hours. Depending on your flexibility, these larger cities might be interesting for you: Dhaka, Trongsa, Thimphu, Daga, and Sangkari. When in this area, you might want to check out Dhaka . We found some clip posted online . Scroll down to see the most favourite one or select the video collection in the navigation. Are you looking for some initial hints on what might be interesting in Paro ? We have collected some references on our attractions page.

Landing at Paro airport in Bhutan

Landing at Paro airport in Bhutan ..

Paro Airport, Bhutan Fear factor: Bhutan's Paro International Airport is one of the world's dangerous landing strips. For it's not so much the landing strip that's scary, but the tricky maneuver neede ..

The cockpit crew was nice enough to offer me to sit inside the cockpit while my Druk Air flight was leaving Paro Airport, Bhutan for Dacca, Bangladesh. The pilot on the left is from New Zealand and th ..

Tiger's Nest Monastery (Paro Taktsang) - www.littlebhutan.com Taktsang is one of the most important Buddhist monasteries in Bhutan. It is situated on a vertical cliff at 3000m north of Paro. The monas ..

Jangtsa Dumgtseg Lhakhang [zlum brtshegs lha khang] is a Buddhist temple in western Bhutan. The temple is notable as it is in the form of a chorten, very rare in Bhutan. It is located on the edge of a hill between the Paro valley and the Dopchari valley, across the bridge from Paro. The Buddhist iconography depicted in the Chorten is considered a unique repository of the Drukpa Kagyu school.

National Museum of Bhutan is a cultural museum in the town of Paro in western Bhutan. Established in 1968, in the renovated ancient Ta-dzong building, above Rinpung Dzong under the command of His Majesty, the King Jigme Dorji Wangchuck, the third hereditary Monarch of Bhutan. The necessary infrastructure was created to house some of the finest specimens of Bhutanese art, including masterpieces of bronze statues and paintings.

Paro District is the name of a district, valley, river and town (population 20,000) in Bhutan. It is one of the most historic valleys in Bhutan. Both trade goods and invading Tibetans came over the pass at the head of the valley, giving Paro the closest cultural connection with Tibet of any Bhutanese district. The dominant language in Paro is Dzongkha, the national language.

The Paro Chhu is a river of western Bhutan. It is a tributary of the Wong Chhu, which is known as the Raidak in its lower reaches. 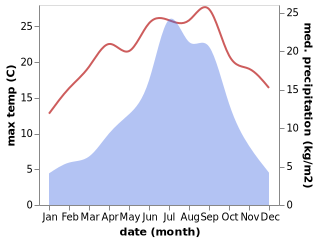