Yingshouyingzi in the region of Hebei is a place located in China - some 80 mi or ( 129 km ) North-East of Beijing , the country's capital .

Local time in Yingshouyingzi is now 08:55 AM (Saturday) . The local timezone is named " Asia/Shanghai " with a UTC offset of 8 hours. Depending on your mobility, these larger cities might be interesting for you: Tianjin, Shijiazhuang, Weichanglu, Jinan, and Beijing. When in this area, you might want to check out Tianjin . Are you looking for some initial hints on what might be interesting in Yingshouyingzi ? We have collected some references on our attractions page.

Xinglong Station is an observatory (IAU code 327) situated south of the main peak of the Yanshan mountains in Hebei province, China. Installed are seven telescopes: a Mark-III photoelectric astrolabe; a 60 cm reflector; an 85 cm reflector; a 60/90 cm Schmidt telescope; an 1.26m infrared telescope; and a 2.16m telescope. The most recent telescope is the 4m LAMOST. It is a popular tourist site.

The Large Sky Area Multi-Object Fibre Spectroscopic Telescope (LAMOST), also known as the Guoshoujing Telescope after the 13th century Chinese astronomer, is a meridian reflecting Schmidt telescope, located in Xinglong Station, Hebei Province, China. Undertaken by the Chinese Academy of Science, the telescope is planned to conduct a 5-year spectroscopic survey of 10 million Milky Way stars, as well as millions of galaxies. The project’s budget is RMB 235 million yuan. 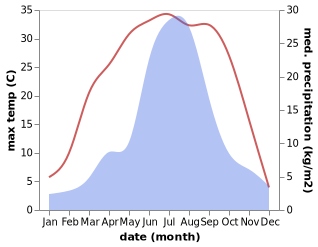