Time in Mintian is now 09:06 PM (Wednesday) . The local timezone is named " Asia/Shanghai " with a UTC offset of 8 hours. Depending on your budget, these more prominent places might be interesting for you: Yunmeng Chengguanzhen, Yuanlin, Xuzhou, Xinshi, and Wuhan. Being here already, consider visiting Yunmeng Chengguanzhen . We collected some hobby film on the internet . Scroll down to see the most favourite one or select the video collection in the navigation. Check out our recommendations for Mintian ? We have collected some references on our attractions page.

Wuhan, where everyone was kung fu fighting Ssfahring's photos around Wuhan, China

Preview of Ssfahring's blog at TravelPod. Read the full blog here: www.travelpod.com This blog preview was made by TravelPod using the TripAdvisor™ TripWow slideshow creator. Learn more about these vi ..

Hankou Railway Station is one of the three main railway stations in the city of Wuhan, the capital of the Hubei Province of the People's Republic of China. It is located within the section of the city commonly known as Hankou (i.e. , the part of the city north of the Yangtze and Hanshui Rivers), although a fairly long distance (several kilometers) to the north from the historical center of Hankou.

The Gezhouba International Plaza is a proposed supertall skyscraper in Wuhan, China. The mixed-use tower is set to rise 350 metres and contain 69 floors. It is expected to be completed in 2013.

More reading: Wikipedia Article
Located at 30.61 114.25 (Lat./Long.); Less than 12 km away
Tags: Buildings and structures under construction in China, Skyscrapers in Wuhan, Skyscrapers over 350 meters

Hankou Cultural Sports Centre is a multi-use stadium in Wuhan, China. It is currently used mostly for football matches. The stadium holds 20,000 people.

The Minsheng Bank Building (also known as Wuhan International Securities Building) is a supertall skyscraper located in Wuhan, China. The 331 m tall building was completed in 2008 and contains 68 floors. In April 2006, the building was topped out, becoming the 18th-tallest building in the world. Currently, it is the 32nd-tallest in the world, and the 15th-tallest in China.

More reading: Wikipedia Article
Located at 30.60 114.27 (Lat./Long.); Less than 14 km away
Tags: Bank buildings, Buildings and structures completed in 2007, Skyscrapers between 300 and 349 meters, Skyscrapers in Wuhan

Xinhua Road Sports Center is a multi-purpose stadium in Wuhan, Hubei province, China. It is currently used mostly for football matches. The stadium has a capacity for 36,000 people. 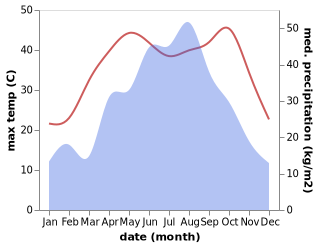