Current time in Alihe is now 10:32 PM (Monday) . The local timezone is named " Asia/Shanghai " with a UTC offset of 8 hours. Depending on the availability of means of transportation, these more prominent locations might be interesting for you: Blagoveshchensk, Xiaoyangqi, Qiqiling, Nirji, and Genhe. Since you are here already, make sure to check out Blagoveshchensk . Where to go and what to see in Alihe ? We have collected some references on our attractions page.

Oroqin Autonomous Banner is an autonomous banner that lies directly south of the urban district of Hailar in the prefecture-level city of Hulunbuir. It has an area of 60,378 km ². According to the 2000 census, there are 292,097 inhabitants with a population density of 4.84 inhabitants per km². Its capital is the town of Alihe (阿里河镇). It includes Ganhe (甘河), Dayangshu (大杨树), Jiwen (吉文). 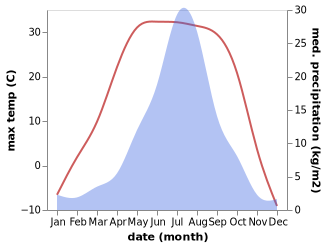