Time in Dalain Hob is now 11:37 AM (Sunday) . The local timezone is named " Asia/Chongqing " with a UTC offset of 8 hours. Depending on your budget, these more prominent locations might be interesting for you: Suzhou, Laojunmiao, Dalandzadgad, and Arguut. Since you are here already, consider visiting Suzhou . Where to go and what to see in Dalain Hob ? We have collected some references on our attractions page.

Tsondol is a locality on the Etsin Col River in the west of Inner Mongolia. It is the type locality for the Relict Gull, a specimen of which was collected by Sven Hedin's expedition team on 24 April 1929.

Eji Nai City (Tangut language, transcribed into Chinese as 亦集乃 Yijinai), paraphrased to Mongolian as Khara-Khoto (Mongolian: ᠬᠠᠷᠠᠬᠣᠲᠠ "black city") and to Chinese as Heishui City (Chinese: 黑城 Hēichéng "black city" or 黑水城 Hēishuǐchéng, "black water city"), was a Tangut city in the Ejin khoshuu of Alxa League, in western Inner Mongolia, near the former Gashun Lake. It has been identified as the city of Etzina, which appears in The Travels of Marco Polo. 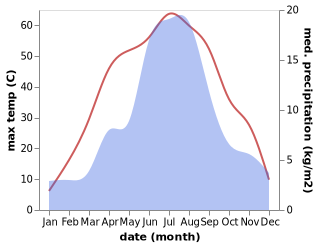