Local time in Hohhot is now 10:05 AM (Saturday) . The local timezone is named " Asia/Chongqing " with a UTC offset of 8 hours. Depending on your mobility, these larger cities might be interesting for you: Zuhu, Yujing, Xinzhou, Xiaojingzhuang, and Xiangyangpu. When in this area, you might want to check out Zuhu . We discovered some clip posted online . Scroll down to see the most favourite one or select the video collection in the navigation. Are you looking for some initial hints on what might be interesting in Hohhot ? We have collected some references on our attractions page.

China, Inner Mongolia, On the Highway

Taken while leaving from Huhot towards the desert. ..

How to make Ramen / La-mian or Chinese 'hand-pulled' noodles

This was probably in Shaanxi or Hohhot, where we stopped for lunch during our Inner Mongolia trip in 2008. We were fascinated by how expert this guy was at 'pulling' his noodles, literally La-mian or ..

The Children of Bubbles

Children in giant beachballs playing in a fountain in Hohhot, China. It looks so fun that it must be illegal in Europe. ..

Suiyuan was a historical province of China. Suiyuan's capital was Guisui. The abbreviation was 綏. The area Suiyuan covered is approximated today by the prefecture-level cities of Hohhot, Baotou, Wuhai, Ordos, Bayan Nur, and parts of Ulaan Chab, all today part of Inner Mongolia Autonomous Region. Suiyuan was named after a district in the capital established in the Qing Dynasty.

The Battle of West Suiyuan was fought from January – February 1940, as part of the Chinese 1939 Winter Offensive.

Hohhot People's Stadium is a multi-use stadium in Hohhot, Inner Mongolia, China. Situated next to Qingcheng Park, it is currently used mostly for football matches. This stadium holds 30,000 people. Prior to the construction of the new Hohhot City Stadium on the north side of the city, it was the home of the Hohhot City Games, several Inner Mongolia Games, and the site of a wide range of sports and political rally activities.

Temple of the Five Pagodas also known as the "Precious Pagoda of the Buddhist Relics of the Diamond Throne" is a Buddhist temple in the city of Hohhot in Inner Mongolia in north-west China. It is located in the older part of the city in the vicinity of Qingcheng Park. Construction of the temple began in 1727 and was completed in 1732. The distinctive five pagodas surmount contains a temple with 1563 images of Buddha carved into its walls each differing slightly to the other.

Ih Juu or Da Zhao Temple is a Buddhist monastery in the city of Hohhot in Inner Mongolia in north-west China. It is the largest temple in the city and is located in a narrow alley west of Tongdao Nan Jie. Built in 1579 it has a shrine that was dedicated to the renowned Qing emperor, Kangxi in the late 17th century and murals in the hallway that commemorate his visit. An astounding 10 ft silver Sakyamuni buddha statue is among the temple's many treasures. 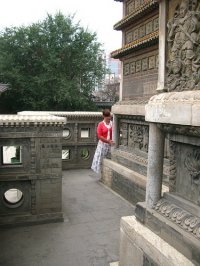 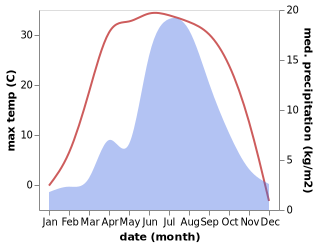