Local time in Zhenjiang is now 11:17 PM (Sunday) . The local timezone is named " Asia/Shanghai " with a UTC offset of 8 hours. Depending on your mobility, these larger cities might be interesting for you: Dongmatou, Zhenzhou, Xuzhou, Xinfeng, and Wuxi. When in this area, you might want to check out Dongmatou . We discovered some clip posted online . Scroll down to see the most favourite one or select the video collection in the navigation. Are you looking for some initial hints on what might be interesting in Zhenjiang ? We have collected some references on our attractions page.

Walking on Air at Huang Shan - The Yellow Mountain

The Chinese bullet train CRH pulls into and out of the Zhenjiang station. At the end see them flip the seats. ..

...at ZhenJiang, China. Video from an out and back crossing to Yangzhou. For the ferry buff. ..

Jingkou, the ancient name for Zhenjiang, Jiangsu Province, is now a district of the city of Zhenjiang. Jingkou originally marked the meeting place of the Yangtze River and the Grand Canal. The district has an area of 115 km and a population of 410,000 people. The postal code for Jingkou is 212001 and the telephone code is 0511.

Runzhou is a district of the city of Zhenjiang in Jiangsu Province. To the east of Runzhou lies the Grand Canal and Jingkou district with Zhenjiang New District to the souheast. The district has an area of 132.68 km. By the end of 2004, the total population was 237,100 people.

The Zhenjiang South Railway Station is a high-speed railway station in Zhenjiang, Jiangsu, People's Republic of China. It is served by the Jinghu High-Speed Railway.

The Runyang Bridge is a large bridge complex that crosses the Yangtze River in Jiangsu Province, China, downstream of Nanjing. The complex consists of two major bridges that link Zhenjiang on the south bank of the river and Yangzhou on the north. The bridge is part of the Beijing-Shanghai Expressway. The south bridge is a suspension bridge with a main span of 1,490 metres . Upon its completion in 2005 it became the third longest suspension bridge span in the world and the largest in China. 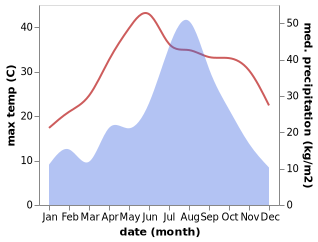