Local time in Ganzi is now 08:05 PM (Monday) . The local timezone is named " Asia/Chongqing " with a UTC offset of 8 hours. Depending on your flexibility, these larger cities might be interesting for you: Shengkang, Qamdo, Xianshui, Xindou, and Xichang. When in this area, you might want to check out Shengkang . We found some clip posted online . Scroll down to see the most favourite one or select the video collection in the navigation. Are you looking for some initial hints on what might be interesting in Ganzi ? We have collected some references on our attractions page.

Garzê County is one of the 18 subdivisions of the Garzê Tibetan Autonomous Prefecture, Sichuan province, China. The Yalong River passes just south of the town Garzê, also known as Ganzi, the capital town of the county, which has some 9,000 inhabitants (2008), many of them ethnic Tibetans, and is famous for its Tibetan lamasery. Historically, it is part of the Tibetan cultural region and province of Khamba. It lies on the northern section of the Sichuan-Tibet Highway. 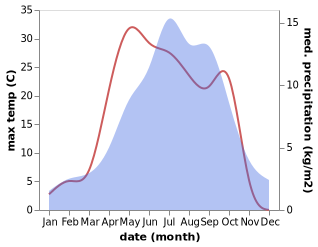