Delve into Yuhu in China

Local time in Yuhu is now 11:44 PM (Sunday) . The local timezone is named " Asia/Chongqing " with a UTC offset of 8 hours. Depending on your mobility, these larger destinations might be interesting for you: Shimen, Shangpa, Luzhang, Laojie, and Jinhua. While being here, you might want to check out Shimen . We discovered some clip posted online . Scroll down to see the most favourite one or select the video collection in the navigation. Are you curious about the possible sightsseing spots and facts in Yuhu ? We have collected some references on our attractions page.

What to see in Yunnan Province, China ..

Cibi Lake is a lake in Eryuan County, northwestern Yunnan Province, China. It lies about 73 km north of Dali City. It is fed by the Fengyu River and drains southward into the Erhai Lake via the Miju River (the upstream of it called Haiwei River). The lake is 6.1 km long and 0.75–2.5 km wide, with a 17 km shoreline.

Eryuan West Lake or Dali West Lake is a plateau lake in western Yunnan province, China. It lies at the northern foot of the snow-covered Cangshan. It is drained from the southern end by the Luoshi River, which flows into the Erhai Lake. The lake is about 2.6 long from north to south and 0.8 to 2.2 km wide from east to west. The surface of the lake is about 1,968 metres above sea level.

Cangshan is a mountain range immediately west of Dali City in Yunnan province of Southwest China. The highest summit, Malong, is 4,122 m, but the mountain includes another 18 peaks all over 3,500 m altitude. The mountain is noted for its very rich, diverse flora, first scientifically documented by Pierre Jean Marie Delavay in 1882. In 1991, construction began on a paved walkway running north and south from the top chairlift station near ancient Dali.

Shaxi is a historic market town in Jianchuan County, Dali Prefecture, Yunnan province, China. It is located roughly halfway between Dali and Lijiang. The Sideng market square of Shaxi was added to the World Monuments Watch List of 100 Most Endangered Sites in 2001. Shaxi started as a trading point for tea and horses during the Tang Dynasty (618 – 907). The prosperity of the town was at its height during the Ming and Qing dynasties (1368–1912). 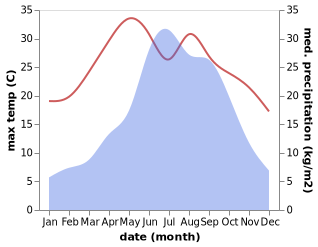