Local time in Labasa is now 01:08 AM (Monday) . The local timezone is named " Pacific/Fiji " with a UTC offset of 13 hours. Depending on your mobility, these larger cities might be interesting for you: Vunivutu, Vesi, Suva, Numbuniyavula, and Namoli. When in this area, you might want to check out Vunivutu . We discovered some clip posted online . Scroll down to see the most favourite one or select the video collection in the navigation. Are you looking for some initial hints on what might be interesting in Labasa ? We have collected some references on our attractions page.

Nothing like the cross cultural exchange of a project like www.tribewanted.com Here we introduce our good friend & jack of all trades (boat captain/fisherman/carpenter/entertainer etc) Marau to the cl ..

Nothing like the cross cultural exchange of a project like www.tribewanted.com Here we introduce our good friend & Sustainability Manager Menusi to the classic British biscuit - the almighty Hobnob! w ..

Preview of Sarah11011's blog at TravelPod. Read the full blog here: www.travelpod.com This blog preview was made by TravelPod using the TripAdvisor™ TripWow slideshow creator. Learn more about these v ..

Subrail Park is a rugby union stadium in Labasa (pronounced "lum-ba-sa") on the island of Vanua Levu in Fiji. The stadium has a nominal capacity of 10,000 people. It currently hosts rugby union matches, such as the Colonial Cup and the Sanyo Cup, and local soccer competitions.

Labasa is a town in Fiji with a population of 27,949 at the most recent census held in 2007. Labasa is located in Macuata Province, in the north-eastern part of the island of Vanua Levu, and is the largest town on the island. The town itself is located on a delta formed by three rivers – the Wailevu, the Labasa (after which the town is named), and the Qawa. The latter two are connected by an 8-kilometer canal.

Labasa Airport is an airport serving Labasa is a town located in Macuata Province, in the northeastern part of the island of Vanua Levu. It is operated by Airports Fiji Limited.

Nggaloyangga River is a river of Vanua Levu, Fiji.

Mbuthaisau River is a river of Vanua Levu, Fiji. 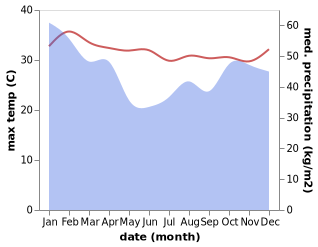