Local time in Stratos is now 01:21 AM (Saturday) . The local timezone is named " Europe/Athens " with a UTC offset of 2 hours. Depending on your flexibility, these larger cities might be interesting for you: Zakynthos, Tripoli, Stanos, Spolaita, and Pipinerion. When in this area, you might want to check out Zakynthos . We found some clip posted online . Scroll down to see the most favourite one or select the video collection in the navigation. Are you looking for some initial hints on what might be interesting in Stratos ? We have collected some references on our attractions page.

Lake Stratos (Greek: Λίμνη Στράτου,Limni Strátou) is an artificial lake in Greece. It is located near Stratos near a pond in which the GR-5/E55 (Antirrio - Arta - Ioannina) viaduct is nearly located. The lake's has a minimum of 60,000,000 m³ of water and the maximum is 70,200,000 m³. The lake is home to the Hellenic Water Ski Federation and today functions as the National Waterskiing Center (Centre). The Acheloos River is dammed by the Stratos Hydroelectric Dam to form this lake.

Lake Ozeros (Greek: Οζερός, Λίμνη Οζερού) is a lake located west of Agrinio. The lake is formed from the waters of the Acheloos river, flowing from the northwest. The lake has a surface of ca. 10 km and an average depth of 8-10 m, but this varies greatly with the season. The GR-5/E55 runs to the northeastern side.

The Archaeological Museum of Agrinio (Greek: Αρχαιολογικό Μουσείο Αγρινίου, Archaiologiko Mouseio Agriniou) is a museum located in the city of Agrinio in Aetolia-Acarnania, in Greece. It lies next to the Papastrateio Municipal Park and features artifacts dating back to Antiquity and Roman times from the area around Agrinio. It was constructed in 1960 through the donation of the Papastratos firm. 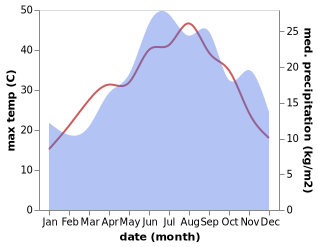