Current time in Kohima is now 12:37 PM (Sunday) . The local timezone is named " Asia/Kolkata " with a UTC offset of 5.5 hours. Depending on the availability of means of transportation, these more prominent locations might be interesting for you: Dhaka, Chittagong, Viswema, Priphema, and Nerhema. Since you are here already, make sure to check out Dhaka . We saw some video on the web . Scroll down to see the most favourite one or select the video collection in the navigation. Where to go and what to see in Kohima ? We have collected some references on our attractions page.

The hornbill festival and the voice of Nagaland ..

My first trial at time lapse photography... "I should have controlled WB and ISO more efficiently but I was impatient".... ..

Kohima /koʊˈhiːmə/  pronunciation is the hilly capital of India's north eastern border state of Nagaland which shares its borders with Burma. It lies in Kohima District and is one of the three Nagaland towns with Municipal council status along with Dimapur and Mokokchung. Kohima is the land of the Angami Naga tribe. The name, Kohima, was officially given by the British as they could not pronounce the Angami name Kewhima or Kewhira (Tenyidie for "the land where the flower Kewhi grows").

The Battle of Kohima was the turning point of the Japanese U Go offensive into India in 1944 in the Second World War. The battle was fought from 4 April to 22 June 1944 around the town of Kohima in northeast India. It is often referred to as the "Stalingrad of the East". The battle took place in three stages.

The Cathedral of Kohima (Mary Help of Christians Church) is the church of the bishop of the diocese of Kohima, and hence, the main church of this diocese of Nagaland, India. The church is noted for its architecture which incorporates many elements of traditional Naga houses, including its facade which resembles that of a Naga house. The architecture of the cathedral blends into the hill on which it is situated. The 16 feet high carved wood crucifix is one of Asia's largest crosses. 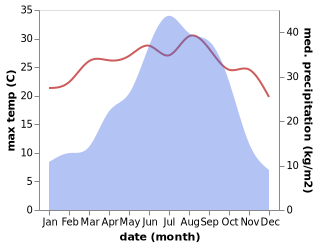