Local time in Ambon City is now 09:03 PM (Thursday) . The local timezone is named " Asia/Jayapura " with a UTC offset of 9 hours. Depending on your flexibility, these larger cities might be interesting for you: Saparua, Piru, Pelau, Passo, and Namlea. When in this area, you might want to check out Saparua . We found some clip posted online . Scroll down to see the most favourite one or select the video collection in the navigation. Are you looking for some initial hints on what might be interesting in Ambon City ? We have collected some references on our attractions page.

Back to the Roots - Central Maluku Melanesia in HD

Garuda B 737-800 Landing in Ambon, maluku-Indonesia

Wim's travel to Bali Banda Ambon. Vulcano lakes (Kelimutu).Banda Sea. Visit and talked with the Last Perkanier van der Broeke!! (decendant of dutch immigrants around 1600 or so) slaughtered in 1999 .. ..

Ambon (2010 pop. 330,335) is the main city and seaport of Ambon Island, and is the capital of Maluku province of Indonesia. It is one of the largest cities in eastern Indonesia. Ambon has an airport, and is home to the state-owned Pattimura University, a state university, and the Indonesian Christian University of Maluku (UKIM), a private Protestant university, though both were seriously damaged during the violence in 2000–2002.

Ambon Island is part of the Maluku Islands of Indonesia. The island has an area of 775 km, and is mountainous, well watered, and fertile. Ambon Island consists of two territories: The main city and seaport is Ambon (with a 2009 population of 284,809), which is also the capital of Maluku province and Maluku Tengah (with a 2009 population of 370,931).

Pattimura Airport is an airport in Ambon, Maluku, Indonesia and one of the major airports in the country. The airport was named after Pattimura, an Indonesian national hero who fought against the Dutch in 1816. 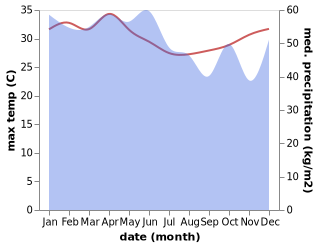