Time in Atyrau is now 03:41 PM (Friday) . The local timezone is named " Asia/Oral " with a UTC offset of 5 hours. Depending on your travel resources, these more prominent places might be interesting for you: Astrakhan', Yerkinkala, Tomarly, Taskala, and Tamarly. Being here already, consider visiting Astrakhan' . We collected some hobby film on the internet . Scroll down to see the most favourite one or select the video collection in the navigation. Check out our recomendations for Atyrau ? We have collected some references on our attractions page.

UFO captured the city of Atyrau

UFO captured the city of Atyrau ..

Preview of Nahury1's blog at TravelPod. Read the full blog here: www.travelpod.com This blog preview was made by TravelPod using the TripAdvisor™ TripWow slideshow creator. Learn more about these vide ..

Atyrau, known as Guryev until 1991, is a transcontinental city in Kazakhstan, and the capital of Atyrau Province. It is located at the mouth of the Ural River, 2700 kilometers west of Almaty and 350 kilometers east of the Russian city of Astrakhan. Other transliterations include Aterau, Atirau, Atyraw, Atyraou, Atırav, Atıraw. Modern Atyrau is famous for its oil and fish industries.

Munayshy Stadium is a multi-use stadium in Atyrau, Kazakhstan. It is currently used mostly for football matches and is the home stadium of FC Atyrau.

ATMA Atyrau Airport is an airport in Atyrau, Kazakhstan. 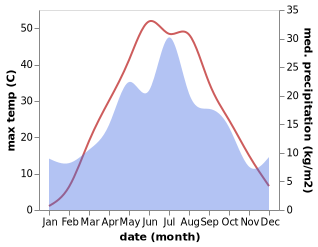