Time in Pakxe is now 10:46 PM (Sunday) . The local timezone is named " Asia/Vientiane " with a UTC offset of 7 hours. Depending on your travel resources, these more prominent places might be interesting for you: Huế, Da Nang, Warin Chamrap, Ubon Ratchathani, and Phibun Mangsahan. Being here already, consider visiting Huế . We collected some hobby film on the internet . Scroll down to see the most favourite one or select the video collection in the navigation. Check out our recomendations for Pakxe ? We have collected some references on our attractions page.

Preview of Jessnel's blog at TravelPod. Read the full blog here: www.travelpod.com This blog preview was made by TravelPod using the TripAdvisor™ TripWow slideshow creator. Learn more about these vide ..

Pakse International Airport is one of the few international airports in Laos. Pakse is the former southern capital city of the Champasak Kingdom.

Champasak Palace, in Pakse, Laos, was a former residence of the Prince of Champasak, Chao Boun Oum. It was built for Prince Boun Oum, as a residence, but he had to abandon it in 1974, before it was finished as the Royal Lao government was overthrown by the communist Pathet Lao. After the revolution, the building was completed and served as a venue for the Communist party congresses and accommodation for visiting dignitaries.

The Champasak Stadium or Champassack Stadium is a newly built football stadium in Pakse, Laos. It is the home of Champasak FC and it is located just north of the Daoruang Market. It has blue and green tribunes and a proper running track around the field. The stadium is sometimes used for ceremonies and concerts. in 2010, when it had a seating capacity of 5,000, it was expanded. The stadium now holds up to 11,000 people.

The Mekong is a trans-boundary river in Southeast Asia. It is the world's 12th-longest river and the 7th-longest in Asia. Its estimated length is 4,350 km, and it drains an area of 795,000 km, discharging 475 km of water annually. From the Tibetan Plateau this river runs through China's Yunnan province, Burma (Myanmar), Laos, Thailand, Cambodia and Vietnam. 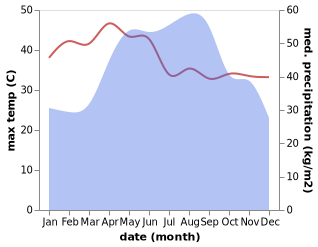