Local time in Tobruk is now 01:38 AM (Monday) . The local timezone is named " Africa/Tripoli " with a UTC offset of 2 hours. Depending on your mobility, these larger cities might be interesting for you: Qaryat Maqrun, Qaryat 'Ayt Zaydan, Qaryat al 'Imamah, Darnah, and Benghazi. When in this area, you might want to check out Qaryat Maqrun . We discovered some clip posted online . Scroll down to see the most favourite one or select the video collection in the navigation. Are you looking for some initial hints on what might be interesting in Tobruk ? We have collected some references on our attractions page.

طبرق ليبيا For residents of the city of Tobruk, Libya cretin 1 ..

طبرق ليبيا For residents of the city of Tobruk, Libya cretin 2 ..

ليبيا طبرق Photo of the city of Tobruk, Libya ..

HMS Ladybird was an Insect-class gunboat of the Royal Navy, launched in 1916. This class are also referred to as "large China gunboats". Originally built to patrol the River Danube during World War I, she was later shipped to China to serve on the Yangtze River.

Battle of Tobruk (1911) or Nadura Hill Battle was a small engagement in the Italo-Turkish War. It is famous due to the involvement and leadership of future Turkish president Mustafa Kemal.

HMS Sikh (F82) was a Tribal-class destroyer of the 4th Destroyer Flotilla of the Royal Navy. She was built by Alexander Stephen and Sons in Glasgow and commissioned in 1938. In 1941, while under the command of Commander Stokes, she took part in the sinking of the German battleship Bismarck in 1941. The night before Bismarck was sunk, she fired a salvo of four torpedoes and claimed a hit after hearing underwater explosions, but actually there were no hits.

Tobruk Power Station is a power station in Tobruk, Libya. It is located near the harbour. 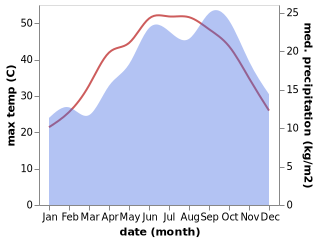