You are here: » » » Quartier Militaire

Delve into Quartier Militaire in Mauritius

Quartier Militaire in the region of Moka with its 6,424 residents is located in Mauritius - some 8 mi or ( 13 km ) South-East of Port Louis , the country's capital .

Local time in Quartier Militaire is now 07:10 PM (Friday) . The local timezone is named " Indian/Mauritius " with a UTC offset of 4 hours. Depending on your mobility, these larger destinations might be interesting for you: Vacoas, Tamarin, Souillac, Saint Pierre, and Rose Belle. While being here, you might want to check out Vacoas . We discovered some clip posted online . Scroll down to see the most favourite one or select the video collection in the navigation. Are you curious about the possible sightsseing spots and facts in Quartier Militaire ? We have collected some references on our attractions page.

Blue Safari Submarine Tour in Mauritius. Dive down and see the magic world below in a submarine. Copyright to www.simplytravel.co.za ..

Exchanging vows away from home may be daunting but there is no need to worry as Beachcomber are specialists in arranging weddings in Mauritius and will look after you every step of the way. ..

Blue Safari SubScooter Tour in Mauritius. A fun way to explore the depths of the ocean. Copyright to www.simplytravel.co.za ..

Moka is a district of Mauritius, situated in the central plateau of the island. The district has an area of 230.5 km2 and the population estimate was at 81,288 as at 31st December 2010.

Sir Seewoosagur Ramgoolam Medical College (SSRMC) (created 1996) is the first medical college established by the Indian Ocean Medical Institute Trust (IOMIT) in Mauritius in the memory of the 'father of the nation', late Sir Seewoosagur Ramgoolam. Mr. R.P.N. Singh, an educationist and social planner from India, is the Founder Chairman and Managing Trustee of the Trust. The courses offered by the medical college are: MBBS BDS The BDS course is closed now.

Pieter Both is the second highest mountain of Mauritius, at 820 metres tall. The mountain is shorter that Piton de la Petite Rivière Noire by eight meters. It is named after Pieter Both, the first Governor-General of the Dutch East Indies. It is located in the Moka Range. The notable feature of this mountain is the gigantic rock formation at the very top of it, which resembles a human head. To climb the mountain following the main ridge takes about an hour, and is mildly difficult.

St. Pierre is a town in the district of Moka in Mauritius. 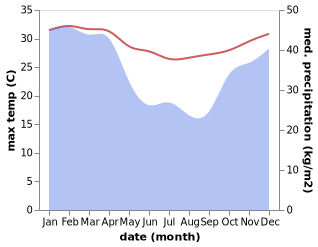