Time in Namp'o is now 07:42 AM (Friday) . The local timezone is named " Asia/Pyongyang " with a UTC offset of 9 hours. Depending on your budget, these more prominent locations might be interesting for you: Daegu, Seoul, Busan, Gwangju, and Incheon. Since you are here already, consider visiting Daegu . We saw some hobby film on the internet . Scroll down to see the most favourite one or select the video collection in the navigation. Where to go and what to see in Namp'o ? We have collected some references on our attractions page.

On our way back to Pyongyang, we passed through the city Nampo. Between Nampo and Pyongyang, we made a stop on that mighty deserted ten lane highway (see video). I also recommend: "Mighty North Korean ..

North Korea - Will You Be The Next Tourist?

Namp'o is a city and seaport in South Pyongan Province, North Korea. It was a provincial-level Directly Governed City (Chikhalsi) from 1980 to 2004, when it was designated a "Special City" (T'ŭkgŭpsi) and made a part of South P'yŏngan. Namp'o was designated a T'ŭkpyŏlsi (teukbyeolsi; 특별시; 特別市) "Special City" in 2010. Namp'o is situated some 50 kilometres south west of P'yŏngyang, at the mouth of the Taedong River.

Pyeonghwa Motors, (a Korean language word for "peace", also spelled Pyonghwa) is one of the two car manufacturers and dealers in North Korean automotive industry. It is a joint-venture in Nampo between Pyonghwa Motors of Seoul, a company owned by Sun Myung Moon's Unification Church, and the North Korean Ryonbong General Corp.

Nampo Stadium is a multi-purpose stadium in Nampo, North Korea. It is currently used mostly for football matches. The stadium holds 30,000 people and opened in 1973.

The Complex of Goguryeo Tombs (Complex of Koguryo Tombs) lie in North Korea. In July 2004, they became the first UNESCO World Heritage site in the country. The site consists of 30 individual tombs from the later Goguryeo kingdom, one of Three Kingdoms of Korea, located in the cities of P'yŏngyang and Namp'o. Goguryeo was one of the strongest Korean kingdoms in the north east of China and the Korean Peninsula from 37 BCE to the 7th century CE.

The Taedong River is a large river in North Korea. It rises in the Rangrim Mountains of the country's north. It then flows southwest into Korea Bay at Namp'o. In between, it runs through the country's capital, Pyongyang. Along the river are landmarks such as the Juche Tower and Kim Il-sung Square. The river has a length of 439 kilometers and is generally deep. It is the fifth longest river on the Korean peninsula and the second longest in North Korea. 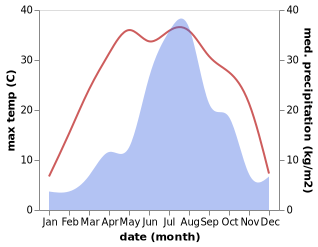