Current time in Colón is now 02:49 PM (Tuesday) . The local timezone is named " America/Panama " with a UTC offset of -5 hours. Depending on the availability of means of transportation, these more prominent locations might be interesting for you: Limón, Quibdó, Santiago de Veraguas, Sambalamba, and Samba Bonita. Since you are here already, make sure to check out Limón . We saw some video on the web . Scroll down to see the most favourite one or select the video collection in the navigation. Where to go and what to see in Colón ? We have collected some references on our attractions page.

Karina Petroni, Born in the Canal Zone, lets you see a touching slide show on how her parents met, lived an Escape filled life and moved to the Panama Canal Zone. Karina was born and grew up in and ar ..

Colón is a sea port on the Caribbean Sea coast of Panama. The city lies near the Caribbean Sea entrance to the Panama Canal. It is the capital of Panama's Colón Province and has traditionally been known as Panama's second city. Colón was originally located entirely on Manzanillo Island, surrounded by Limon Bay, Manzanillo Bay, and the Folks River.

Cristóbal is a port in the Atlantic side of the Panama Canal. It is located on the western edge of Manzanillo Island and is part of the Panamanian city and province of Colón. Cristóbal Colón is the Spanish translation for Christopher Columbus, an explorer from Italy for whom these places were named.

Estadio Armando Dely Valdés is a multi-purpose stadium in Colón, Panama. It is currently used mostly for football matches and is the home stadium of CD Árabe Unido. The stadium holds 4,000 people, and is named after former Panamanian footballer, Armando Dely Valdés.

Manzanillo International Terminal is located located east of the Atlantic opening of the Panama Canal on the Manzanillo Bay, Colón Province, Republic of Panama. MIT is a distribution center for cargoes destined for cities within the Republic of Panama and neighboring countries in Central America and the Caribbean. It is one of the biggest container transhipment terminals of the region and has direct access into the Colon Free Trade Zone (CFZ).

Coco Solo was a United States Navy submarine base established in 1918 on the Atlantic Ocean (northwest) side of the Panama Canal Zone, near Colón, Panama. United States Senator John McCain was born in 1936 at a small Navy hospital at Coco Solo Naval Air Station. The larger Coco Solo Hospital was constructed in the summer of 1941. 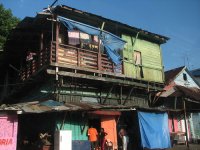