Port Moresby in the region of National Capital District with its 283,733 habitants is a place located in Papua New Guinea and is the capital of this country.

Local time in Port Moresby is now 07:45 PM (Sunday) . The local timezone is named " Pacific/Port Moresby " with a UTC offset of 10 hours. Depending on your mobility, these larger cities might be interesting for you: Tupuseleia, Saraga, Roku, Port Moresby, and Porebada. When in this area, you might want to check out Tupuseleia . We discovered some clip posted online . Scroll down to see the most favourite one or select the video collection in the navigation. Are you looking for some initial hints on what might be interesting in Port Moresby ? We have collected some references on our attractions page.

Don & Phil tackle the trip from Badili up 3 Mile Hill, thru Taurama & right on to Boroko one Sunday morning in October, 2004. ..

Phil checks out the view from lower Touaguba Hill, looking towards Town, Ela Beach & Koki in the distance. ..

Wards Airfield is a former World War II airfield near Port Moresby, Papua New Guinea. The airfield was abandoned after the war and was developed into the Waigani area of Port Moresby. The airfield was named in honor of Australian Lt. Col. K. H. Ward, who was involved with its construction and was KIA on 27 August 1942, during the fighting at Isurava on the Kokoda Trail. It was also known as "6-Mile or 6-Mile Drome" by Americans, for its distance from Port Moresby.

Lloyd Robson Oval is a sporting ground in Port Moresby, Papua New Guinea. It hosted 3 games for the 1989–1992 Rugby League World Cup. It has been the home ground for the Papua New Guinea national rugby league team since 1982. It has a total capacity of just over 10,000 people. Lloyd Robson Oval was the primary venue of the 2009 Pacific Cup. The four round-robin matches were played at the ground on 24-25 October and 31 October, with the final played on 1 November 2009.

The Hubert Murray Stadium is a sports venue located in Port Moresby, the capital city of Papua New Guinea. I. It is used for playing football and is not particularly suited to any large events. It is more comparable to a regional sporting facility than one of any national significance whatsoever. It has an approx. capacity of 15,000 spectators. It is named after Sir Hubert Murray a former Lieutenant Governor. 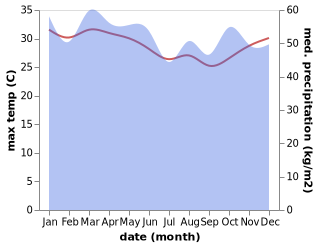