Delve into Laoag in Philippines

Current time in Laoag is now 11:02 PM (Friday) . The local timezone is named " Asia/Manila " with a UTC offset of 8 hours. Depending on your travel modalities, these larger destinations might be interesting for you: Tuguegarao City, Taguig City, Tagudin, Suyo, and Solana. While being here, make sure to check out Tuguegarao City . We encountered some video on the web . Scroll down to see the most favourite one or select the video collection in the navigation. Are you curious about the possible sightsseing spots and facts in Laoag ? We have collected some references on our attractions page.

Setting a new standard in Philippine Festivals: The winning piece of the Empanada Festival Dancers of the City of Batac in the first Tan-ok ni Ilocano Festival of Festivals organized by Provincial Gov ..

Raising the bar in Philippine Festivals: Empanada Festival Dancers of the City of Batac veer away from traditional festival presentations with another world class act in the 2012 Tan-ok ni Ilocano: Th ..

Monroe Island is a small island located at the mouth of Laoag River in Laoag, Ilocos Norte, Philippines.

The Marcos Museum and Mausoleum integrates both memorabilia storage and the current resting place of Ferdinand Edralin Marcos. It is situated in the heart of Batac City, Ilocos Norte. The museum shows memorabilia of the late president, from his stint in the armed forces down to his presidency. The large and solemn mausoleum contains the glass-encased coffin in which Marcos' embalmed body has been on public display since shortly after his remains were brought home in 1993.

Paoay Church is the Roman Catholic parish church of the municipality of Paoay, Ilocos Norte in the Philippines. Completed in 1710, the church is famous for its distinct architecture highlighted by the enormous buttresses on the sides and back of the building. In 1993, the church was designated as a UNESCO World Heritage Site as one best examples of the Baroque Churches of the Philippines. 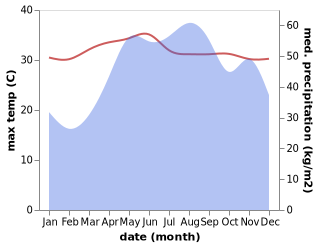