Local time in Chelyabinsk is now 01:53 PM (Monday) . The local timezone is named " Asia/Yekaterinburg " with a UTC offset of 6 hours. Depending on your flexibility, these larger cities might be interesting for you: Zheleznodorozhnyy, Smolinskiy, Shershni, Pershino, and Novosineglazovskiy. When in this area, you might want to check out Zheleznodorozhnyy . We found some clip posted online . Scroll down to see the most favourite one or select the video collection in the navigation. Are you looking for some initial hints on what might be interesting in Chelyabinsk ? We have collected some references on our attractions page.

Brief history and current status of the progress of the Chelyabinsk Ministry Center. The Window of Opportunity addresses the window of time available to complete this mission project and shares this y ..

On 15 February 2013, a small asteroid entered Earth's atmosphere over Russia at about 09:20 YEKT with an estimated speed of 18 km/s (40,000 mph); it became a brilliant superbolide meteor over the southern Ural region. The dazzling light of the meteor was bright enough to cast moving shadows during the morning daylight in Chelyabinsk and was observed from Sverdlovsk, Tyumen, Orenburg Oblasts, the Republic of Bashkortostan, and in Kazakhstan. Eyewitnesses also felt intense heat from the fireball.

Chelyabinsk Trade Center (Russian: Челябинский Торговый центр) is a building on the embankment of the Miass River in Chelyabinsk, Russia, built in 1975. The Trade Center silhouette became one of the symbols of the city. The main square building (side size is 102 meters) is covered by the dome, which is supported only by the columns on its edges. The dome itself is made of 1500 reinforced concrete shells, tightened together with metal cables. Total weight of the dome is above 5000 tons.

South Ural State University (SUSU) (Russian: Южно-Уральский государственный университет) was established on December 15, 1943 as Chelyabinsk Mechanical Engineering Institute in Chelyabinsk. It was founded as a response to the defense enterprises need of engineers during World War II. 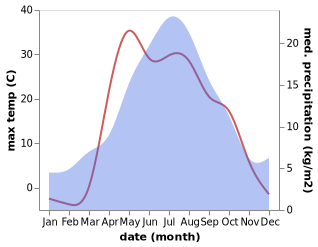