Naryan-Mar in the region of Nenetskiy Avtonomnyy Okrug with its 18,041 habitants is a place located in Russia - some 961 mi or ( 1546 km ) North-East of Moscow , the country's capital .

Local time in Naryan-Mar is now 04:27 AM (Monday) . The local timezone is named " Europe/Moscow " with a UTC offset of 4 hours. Depending on your mobility, these larger cities might be interesting for you: Yekusha, Nikittsy, and Malaya Naryga. When in this area, you might want to check out Yekusha . Are you looking for some initial hints on what might be interesting in Naryan-Mar ? We have collected some references on our attractions page.

Zapolyarny District is an administrative province in Nenets Autonomous Okrug, Russia. It consists of all the land within the okrug. The administrative centre is Iskateley.

Naryan-Mar Airport is an airport in Russia located 3 km east of Naryan-Mar. It is a mixed civilian-military field, and is the only major facility airfield on the Barents Sea coast between Arkhangelsk and Novaya Zemlya. It served as a rear operations air base for Rogachevo air base on Novaya Zemlya. 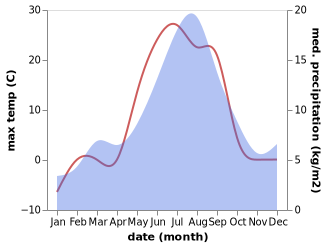