Current time in Veliky Novgorod is now 12:50 AM (Thursday) . The local timezone is named " Europe/Moscow " with a UTC offset of 4 hours. Depending on the availability of means of transportation, these more prominent locations might be interesting for you: Rēzekne, Volkhovskiy, Staroye Rakomo, Spas-Nereditsy, and Smolensk. Since you are here already, make sure to check out Rēzekne . We saw some video on the web . Scroll down to see the most favourite one or select the video collection in the navigation. Where to go and what to see in Veliky Novgorod ? We have collected some references on our attractions page.

From winter swimming competition in Velikiy Novgorod. At -16C the camera battery got frozen quickly :( ..

Historic Monuments of Novgorod and Surroundings

Historic Monuments of Novgorod and Surroundings is a composite World Heritage Site which includes a number of medieval monuments in and around Veliky Novgorod, Russia. The site was inscribed in 1992.

Yaroslav's Court (Russian: Ярославово Дворище, Yaroslavovo Dvorishche) was the princely compound in the city of Novgorod the Great. Today it is roughly the area around the Trade Mart, the St. Nicholas Cathedral, the Church of St. Procopius, and the Church of the Myrrh-bearing Women. The Trade Mart renovated and heavily modified in the sixteenth and seventeenth centuries, is all that is left of the princely palace itself.

Novgorod Kremlin stands on the left bank of the Volkhov River in Veliky Novgorod about two miles north of where it empties out of Lake Ilmen.

The Millennium of Russia is a famous bronze monument in the Novgorod Kremlin. It was erected in 1862 to celebrate the millennium of Rurik's arrival to Novgorod, an event traditionally taken as a starting point of Russian history. A competition to design the monument was held in 1859. An architect Viktor Hartmann and an artist Mikhail Mikeshin were declared the winners. Mikeshin's design called for a grandiose, 15-metre-high bell crowned by a cross symbolizing the tsar's power.

The Cathedral of St.  Sophia in the Kremlin (or Detinets) in Veliky Novgorod is the cathedral church of the Archbishop of Novgorod and the mother church of the Novgorodian Eparchy. 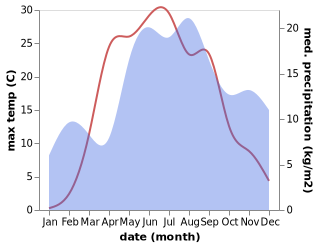