Local time in Izhevsk is now 08:32 AM (Tuesday) . The local timezone is named " Europe/Samara " with a UTC offset of 4 hours. Depending on your flexibility, these larger cities might be interesting for you: Zavodskaya, Zarya, Yagul, Varaksino, and Ufa. When in this area, you might want to check out Zavodskaya . We found some clip posted online . Scroll down to see the most favourite one or select the video collection in the navigation. Are you looking for some initial hints on what might be interesting in Izhevsk ? We have collected some references on our attractions page.

Saint Michael's Cathedral (Собор святого Архистратига Михаила) in Izhevsk rivals the older Alexander Nevsky Cathedral as the main Orthodox church of Udmurtia in Russia. Its Russian Revival design belongs to Ivan Charushin, a little-known 19th-century architect from Vyatka. The red-brick church is capped with a tent-like roof that rises to a height of 67 metres. It is encircled by several massive chapels with gilded bulbous domes and slender tent-like belfries.

The Alexander Nevsky Cathedral is a Russian Orthodox church in Izhevsk, Udmurtia dedicated to St. Alexander Nevsky. The Neoclassical building has a round golden cupola, an Ionic portico and a steepled bell tower rising above it. Like the Dnipropetrovsk Cathedral in Ukraine, the building was modeled on St. Andrew's Cathedral in Kronstadt (whose architect was Andreyan Zakharov).

Izhevsk Machinebuilding Plant (Russian: Ижевский Mашиностроительный Завод) or IZHMASH (ИЖМАШ) is a weapons and motor vehicle manufacturer based in Izhevsk, founded in 1807 at the decree of Tsar Alexander I, and is now one of the largest corporations in its field. It manufactures the famous Kalashnikov series of assault rifle, along with a host of other Russian arms, including medium cannons, missiles, and guided shells. Izhmash also produces other goods, such as motorcycles and cars.

The Izhevsk Pond is an artificial body of water, or reservoir, created in 1760 at the bidding of Peter Ivanovich Shuvalov for the needs of an iron works in Izhevsk, Russia. It is placed at the confluence of the Izh River and its tributary, the Yagul. The reservoir was filled with water necessary for the factory's operation by June 1763. The dam was reconstructed by Alexander Deryabin in the early 19th century and underwent further modernization in 1984. 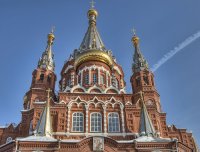 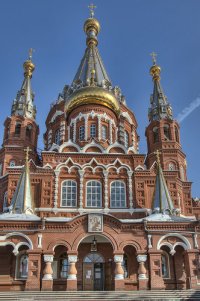 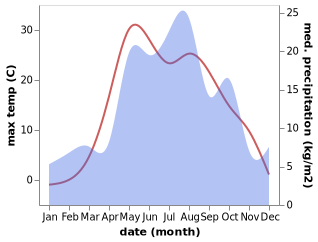