Delve into Jeddah in Saudi Arabia

Local time in Jeddah is now 03:36 PM (Wednesday) . The local timezone is named " Asia/Riyadh " with a UTC offset of 3 hours. Depending on your mobility, these larger destinations might be interesting for you: Khumrah, Jeddah, Burayman, Medina, and Abha. While being here, you might want to check out Khumrah . We discovered some clip posted online . Scroll down to see the most favourite one or select the video collection in the navigation. Are you curious about the possible sightsseing spots and facts in Jeddah ? We have collected some references on our attractions page.

كارثة فيضان وسيول جدة It was a day of disaster upon Jeddah, its was raining heavenly, and it caused alot of losses.25th of Nov 2009 8th of Thulhejah 1430 ..

His Majesty King Saud Mosque is the largest mosque in the city of Jeddah and is located in Jeddah's Al-Sharafeyyah District. The Mosque was designed by Abdel-Wahed El-Wakil and was finished in 1987. It is mainly build of brick and covers an area of 9700 m² with the prayer hall alone covering 2464 m². The largest dome has a span of 20 meters and reaches a height of 42 meters. The Minaret reaches a height of 60 meters.

The Savola Group is a Saudi Arabian industrial company. The Group’s major holdings supply Saudi Arabia, the Middle East and North African countries with edible oils, sugar, fresh dairy products, and restaurants serving fast foods. The Group also owns the largest grocery retailing chain in the Middle East, the Azizia Panda supermarket. Savola Group is ranked as number 9 among top 100 companies in the Saudi Arabian market and ranked as number 2 among the industrial sector after SABIC.

The Tomb of Eve, also known as Eve's Grave and Eve's Tomb, is an archeological site located in Jeddah, Saudi Arabia . It is considered by some Muslims to be the burial place of the Biblical Eve. Richard Francis Burton mentions seeing it in his translation of the Book Of One Thousand Nights And A Night. The site was sealed with concrete by the religious authorities in 1975 as a result of pilgrims praying at the tomb.

King Abdulaziz University (KAU) was founded in 1967 in Jeddah, Saudi Arabia. Designed by English architect John Elliott, it had 2,000 faculty and more than 37,000 students in 2000/2001. Established initially as a private university by a group of businessmen led by Sheikh Muhammad Abu Bakr Bakhashab Pasha and including the writer Hamza Bogary. King Abdulaziz University was converted to a state university in 1971. 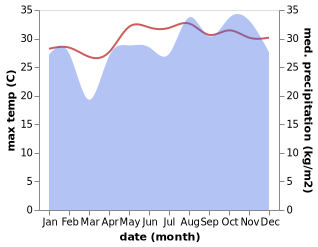