Ljubno in the region of Slovenia (general) is located in Slovenia - some 26 mi or ( 41 km ) North-East of Ljubljana , the country's capital city .

Time in Ljubno is now 07:35 AM (Monday) . The local timezone is named " Europe/Ljubljana " with a UTC offset of 1 hours. Depending on your budget, these more prominent places might be interesting for you: Graz, Munich, Bratislava, Prague, and Venice. Being here already, consider visiting Graz . We collected some hobby film on the internet . Scroll down to see the most favourite one or select the video collection in the navigation. Check out our recomendations for Ljubno ? We have collected some references on our attractions page.

i decided to make this "cover" cause i really like the original. it's one of my favourites... all the samples were recorded by me at home (believe me or not: on the web-cam's microphone - but it doesn ..

Dreta is a river in Lower Styria, Slovenia. The river is 29 kilometres in length. Its source is near Črnivec Pass in Kamnik Alps. It flows through the town of Gornji Grad, Bočna, and Šmartno ob Dreti, and merges with the Savinja River in Nazarje.

The Tuhinj Valley is a valley in Slovenia linking the Celje Basin with the Ljubljana Basin in an east-west direction along the courses of the Nevljica and Motnišnica rivers. The western part of the valley was formed by the watershed of the Nevljica, flowing into the Kamnik Bistrica, and the narrower, eastern part by the Motnišnica, a tributary of the Savinja River. Their drainage divide is at the Kozjak Pass at an elevation of 655 m between Cirkuše v Tuhinju and Špitalič.

Rinka Falls is a waterfall in the Logar Valley, in the Municipality of Solčava in Slovenia. It is the source of the Savinja River. It has been proclaimed a natural heritage feature. Rinka Falls is one of the most beautiful and best-known waterfalls in Slovenia. It is also a popular tourist destination. With its drop of 105 metres, it is the highest of the 20 waterfalls in the Logar Valley. The longest step has a length of 90 m . It is visited in all seasons of the year.

Žovnek Castle is a castle northeast of Braslovče, Slovenia. It lies above Lake Žovnek. It got its name after Lords of Žovnek, later Counts of Celje. The castle was first mentioned in 1278 as Castrum Sevnekke, and later as Sannegg.

Črnivec Pass, usually just Črnivec, is a mountain pass in the Kamnik Alps that connects the regions of Upper Carniola and Styria in Slovenia. It lies on the drainage divide between the Kamnik Bistrica and Dreta rivers. The road connecting Kamnik and Gornji Grad traverses the pass. 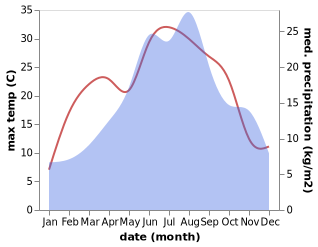