Delve into Mogadishu in Somalia

Mogadishu in the region of Banaadir with its 2,587,183 residents is a city in Somalia and is the capital of this country.

Current time in Mogadishu is now 08:55 PM (Monday) . The local timezone is named " Africa/Mogadishu " with a UTC offset of 3 hours. Depending on your travel modalities, these larger destinations might be interesting for you: Scidle, Qoryooley, Nimoow, Merca, and Kismayo. While being here, make sure to check out Scidle . We encountered some video on the web . Scroll down to see the most favourite one or select the video collection in the navigation. Are you curious about the possible sightsseing spots and facts in Mogadishu ? We have collected some references on our attractions page.

The Advance on Al Shabaab in Somalia (Dispatch)

I Against My Brother - a Somali Story

"I am a Somali Christian, a contradiction." One muslim woman's journey of faith that challenges her ideas about what it means to be a Christian, and drives her to a decision that could cost her everyt ..

Mogadishu Cathedral is a Roman Catholic cathedral located in Mogadishu, Somalia. When still operational, it served as the seat of the Roman Catholic Diocese of Mogadiscio.

Ministry of Education & Culture is the ministry that is responsible for education and culture in Somalia. The ministry has ten departments.

2009 African Union base bombings in Mogadishu

Two large-scale attacks against AMISOM soldiers carried out by al-Shabaab suicide bombers in Mogadishu, Somalia occurred in 2009. In total 32 people, including 28 AMISOM soldiers were killed and 55 people were injured by the two bombings.

The Fakr ad-Din Mosque is the oldest mosque in Mogadishu, Somalia. It is located in Hamar Weyne (literally "Big Hamar"), the oldest part of the city.

Villa Somalia is the presidential palace of Somalia, which sits on high ground near the shores of the Indian Ocean in Mogadishu, with access to both the harbor and airport. The complex was the residence of the first president of Somalia, Aden Abdullah Osman Daar of the Somali Youth League (SYL); and of Siad Barre, president until his ouster in 1991. 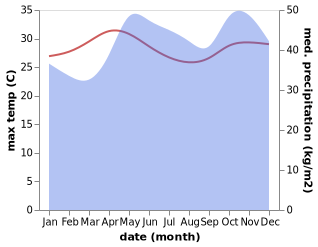