Local time in Mbeya is now 07:41 AM (Friday) . The local timezone is named " Africa/Dar es Salaam " with a UTC offset of 3 hours. Depending on your flexibility, these larger cities might be interesting for you: Uyole, Utengule, Tabora, Sumbawanga, and Songwe. When in this area, you might want to check out Uyole . We found some clip posted online . Scroll down to see the most favourite one or select the video collection in the navigation. Are you looking for some initial hints on what might be interesting in Mbeya ? We have collected some references on our attractions page.

A train trip in Tanzania ..

A short video highlighting some of my experiences visiting Tanzania in May. Footage was shot in Dar es Salaam, Mbeya, and Mwanza. Some interesting locations in the video include Coco Beach and a fish ..

Mbeya is a city located in southwest Tanzania, Africa. Mbeya's urban population was 280,000 in 2005. Mbeya is the capital of the surrounding rural Mbeya region (population, with Mbeya, totals approx. 2 million). Mbeya is the first large urban settlement encountered when travelling overland from the neighbouring nation of Zambia. Mbeya is situated at an altitude of 1,700 meters (5,500 ft), and sprawls through a narrow highland valley surrounded by a bowl of high mountains.

Loleza Peak is a mountain in Mbeya Region, Tanzania, East Africa. It is located in the Mbeya Range, just north of the city of Mbeya. It is 2,656 metres high. It is the type locale for the moth Zamarada loleza.

Mbeya Range is a volcanic mountain range in Mbeya Region, in southwestern Tanzania, East Africa. It forms an arc just north of the town of Mbeya and includes Loleza Peak (2656 m. ), Mbeya Peak (2565 m. ), Nyanuwa Peak (2332 m. ), and Pungulumo (1909 m.). The range is at the junction of the eastern Gregory Rift and western Albertine Rift valleys. and is in Rungwe volcanic province.

Uyole is an administrative ward in the Mbeya Urban district of the Mbeya Region of Tanzania. According to the 2002 census, the ward has a total population of 6,229.

Lake Ngozi is the second largest Crater Lake in Africa. It can be found near Tukuyu, a small town in the highland Rungwe District, Mbeya Region, of southern Tanzania in East Africa. 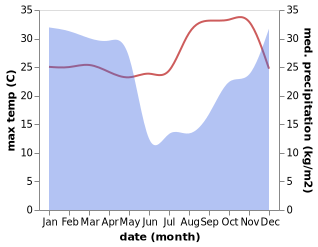