Local time in Kara is now 02:15 AM (Friday) . The local timezone is named " Africa/Lome " with a UTC offset of 0 hours. Depending on your mobility, these larger cities might be interesting for you: Kumasi, Accra, Ouargaye, Ouagadougou, and Tialaide. When in this area, you might want to check out Kumasi . We discovered some clip posted online . Scroll down to see the most favourite one or select the video collection in the navigation. Are you looking for some initial hints on what might be interesting in Kara ? We have collected some references on our attractions page.

Hope Through Health (HTH) is a 501(c)3 public charity with a mission to promote health as a human right. As communications specialist consultant, I created this short video from an interview and journ ..

Preview of Arlash's blog at TravelPod. Read the full blog here: www.travelpod.com This blog preview was made by TravelPod using the TripAdvisor™ TripWow slideshow creator. Learn more about these video ..

Kara is a city in northern Togo, situated in Kara Region, 413 km north of the capital Lomé. Situated in the country of Togo, near the other western African countries of Ghana, Burkina Faso and Benin. Kara is the capital of the Kara region and had a population of 94,878 at the 2010 Census. The Haugeau River flows a little way south of the city and is their main resource of water.

Kozah is a prefecture located in the Kara Region of Togo.

Bafilo is a city in Togo south of Kara, in Kara Region, known for its large mosque, good wagassi cheese, its weaving industry and the nearby Bafilo Falls.

Assoli is a prefecture located in the Kara Region of Togo. The capital city is Bafilo.

The Battle of Bafilo was a skirmish between French and German troops in Bafilo, northeastern Togoland on 13 August 1914 at the beginning of the First World War. French forces first crossed the border between French Dahomey and Togoland on 8 or 9 of August 1914. French units in northeastern Togoland came into contact with German ones on 13 August in the districts of Sansane-Mangu and Skode-Balfilo. 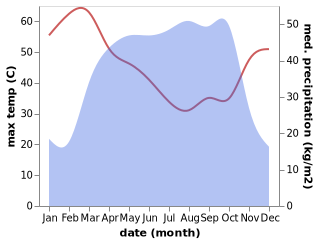