Time in Trabzon is now 10:52 AM (Sunday) . The local timezone is named " Europe/Istanbul " with a UTC offset of 2 hours. Depending on your budget, these more prominent places might be interesting for you: Gaziantep, Erzurum, Erzincan, Diyarbakır, and Adıyaman Province. Being here already, consider visiting Gaziantep . We collected some hobby film on the internet . Scroll down to see the most favourite one or select the video collection in the navigation. Check out our recommendations for Trabzon ? We have collected some references on our attractions page.

The ancient city of Trabzon saw its most affluent days after the Latin Fourth Crusade turned against their fellow Christians and captured Constantinople in 1204 The successor Byzantine state in Trebiz ..

One of the oldest church in the world Zodycotton's photos around Trabzon, Turkey (travel pics)

Preview of Zodycotton's blog at TravelPod. Read the full blog here: www.travelpod.com This blog preview was made by TravelPod using the TripAdvisor™ TripWow slideshow creator. Learn more about these v ..

İskender Pasha Mosque is a 16th-century built Ottoman mosque in Trabzon, Turkey. The madrasas in its courtyard no longer exist, and the old graveyard in the west has been done away, leaving only the grave of Iskender Pasha. A number of extensions have been made at various times and this, combined with restorations, has destroyed the originality of the mosque, the stone work of which, however is of the highest quality. The minaret features alternating courses of brick and colored stone.

The Yeni Cuma Mosque is a mosque in Trabzon, Turkey. It was built during Byzantine times as the Hagios Eugenios Church, dedicated to Saint Eugenius, the patron saint of the city. It is not known exactly when the church was built, however researchers consider that it was a basilica. An inscription dated 1291 has been found in it. The present building was probably built in the 14th century as a cruciform church. It has no narthex today, but there are three naves.

Trabzon is a city on the Black Sea coast of north-eastern Turkey and the capital of Trabzon Province. Trabzon, located on the historical Silk Road, became a melting pot of religions, languages and culture for centuries and a trade gateway to Iran in the southeast and the Caucasus to the northeast.

Boztepe or Mount Minthrion is a hill near Trabzon in Turkey. It is located 3 kilometers southeast of the city center of Trabzon. The Değirmendere Valley lies to the west of Boztepe. The Kaymaklı quarter occupies most of the Boztepe hill. The area has been religiously significant since ancient times. (Whiting, pg 565) There are four sacred fountains on Bozetepe. That of Saint John the Sanctifier is near the summit. On the site is a mosque that was formerly a nineteenth-century church.

Trabzon 19 Mayıs Arena (Turkish: Trabzon 19 Mayıs Spor Salonu) is an indoor basketball venue located in Trabzon, Turkey. Built in 1951, the venue hosted the 2007 Black Sea Games. Following renovation works in 2010, basketball matches for girls were played at this arena during the 2011 European Youth Summer Olympic Festival. The arena is home to the basketball teams of the clubs Trabzonspor K. , Trabzon İdmanocağı S.K. and Trabzon Belediyesi S.K. 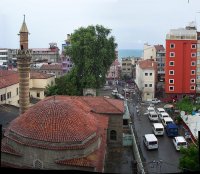 Photo: I was in Turkey (CC) 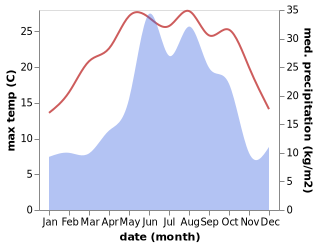