Delve into Funafuti in Tuvalu

Funafuti in the region of Funafuti with its 4,492 residents is a city in Tuvalu and is the capital of this country.

Current time in Funafuti is now 10:43 AM (Sunday) . The local timezone is named " Pacific/Funafuti " with a UTC offset of 12 hours. Depending on your travel modalities, these larger destinations might be interesting for you: Funafala Village, Amatuku Village, and Funafuti. While being here, make sure to check out Funafala Village . We encountered some video on the web . Scroll down to see the most favourite one or select the video collection in the navigation. Are you curious about the possible sightsseing spots and facts in Funafuti ? We have collected some references on our attractions page.

Trundling past the runway and through the streets of Vaiaku, Fongafale Islet, Funafuti Atoll, and ending at the jetty next to the Vaiaku Lagi Hotel (April 2010) - raw video. Photo galleries of my visi ..

The 5th instalment of the "Tuvalu by Bicycle" series sees us starting in downtown Vaiaku (if you can call it that...) near the government office and airport terminal, and heading along Tuvalu Road nor ..

Number 6 in the Tuvalu by bicycle series. Trundling along Fongafale Road that heads north from the Vaiaku Lagi Hotel, through the "suburbs" of Fongafale Island, Tuvalu, in April 2010 on a rusty old bi ..

The Vaiaku Langi Hotel, or Vaiaku Lagi Hotel, is situated in Funafuti, in the Pacific island nation of Tuvalu. See also: Fongafale and Funafuti

Tuvalu Sports Ground is a multi-use stadium in Funafuti, Tuvalu. It is currently used mostly for football and rugby matches. The stadium holds 1,500 people. It is the only stadium in Tuvalu so that all football tournaments are played at the stadium: A-Division; Independence Cup; NBT Cup; Tuvalu Games and also the Christmas Cup. The roof of the stadium has been adorned with photovoltaic solar panels and supplies approximately 5% of the electricity needs for Funafuti.

Funafuti is an atoll that forms the capital of the island nation of Tuvalu. It has a population of 4,492 (2002 Census), making it the most populated atoll in the country. It is a narrow sweep of land between 20 and 400 metres wide, encircling a large lagoon 18 km long and 14 km wide. With a surface of 275 km², it is by far the largest lagoon in Tuvalu. The land area of the 33 islets aggregates to 2.4 km², less than one percent of the total area of the atoll.

Fatato is an uninhabited isle (motu) of Funafuti, Tuvalu. In 2003 the Asian Pacific Network (APN) chose this island for a systematic study of its coast in relation to the impact of global climate change on atolls.

Papa Elise is an islet of Funafuti, Tuvalu. The name Papa Elise is a translation of Father Ellice, and refers to a missionary who came to Funafuti in the late 19th century. 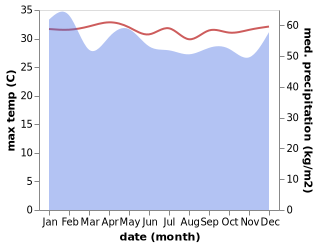