Current time in Ta'izz is now 01:35 AM (Thursday) . The local timezone is named " Asia/Aden " with a UTC offset of 3 hours. Depending on the availability of means of transportation, these more prominent locations might be interesting for you: Yufrus, Wadi Kadah, Sanaa, Lahij, and Dhi as Sufal. Since you are here already, make sure to check out Yufrus . We encountered some video on the web . Scroll down to see the most favourite one or select the video collection in the navigation. Where to go and what to see in Ta'izz ? We have collected some references on our attractions page.

Republic of Yemen: the city of Taiz is about a 2 hour drive from Aden, or 3-4 hours from Sanaa, and is a beautiful city to walk around due to the high and relatively green mountains where people tradi ..

Travels in Yemen, 2005: Was walking down the streets of Ta'izz, when this musician played a sudden concert for me ... www.thecandytrail.com ..

Ta'izz, or Taiz, is a city in the Yemeni Highlands, near the famous Mocha port on the Red Sea, lying at an elevation of about 1,400 metres above sea level. It is the capital of Ta'izz Governorate. With a population of over 600,000 in 2005, it is the third largest city in Yemen after the capital Sana'a and the southern port of Aden. Ta'izz has a dramatic setting where the roads run up and down the mountain sides. Above the city rises the 3,006 metres high Sabir Mountain.

Ta'izz is a governorate of Yemen. The governorate's capital is Ta'izz, which is the third largest city in Yemen. Other major towns include Al Sawa, Juha and the famous coffee port of Mocha. It has a total population of just over three million and an area of 10,677 km². For such a small area, Ta'izz governorate has an extraordinarily diverse geography. The western half of the governorate is part of the Tihamah coastal plain and has an exceedingly hot, humid and arid climate.

Ta'izz International Airport is a public airport located in Ta'izz, the capital of the Ta'izz Governorate, Yemen.

Rahabah is a village in western central Yemen. It is located in the San‘a’ Governorate. 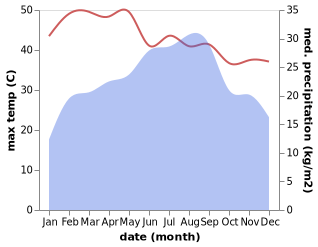