Time in Homyel is now 11:55 AM (Sunday) . The local timezone is named " Europe/Minsk " with a UTC offset of 3 hours. Depending on your budget, these more prominent locations might be interesting for you: Zhlobin, Ostrovy, Yakubovka, Svyetlahorsk, and Rahachow. Since you are here already, consider visiting Zhlobin . We saw some hobby film on the internet . Scroll down to see the most favourite one or select the video collection in the navigation. Where to go and what to see in Homyel ? We have collected some references on our attractions page.

Gomel from the bridge

Central Stadium is a football-specific stadium in Gomel, Belarus. It is currently used as a home ground of Gomel. The stadium is all-seater and has a capacity of 14,307 people. The stadium was opened in 2004.

Homyel Raion is an administrative subdivision, a raion of Homiel Voblast, in Belarus.

The Rumyantsev-Paskevich Residence is the main place of historical importance in the city of Gomel, Belarus. The grounds of the residence stretch for 800 meters along the steep right bank of the Sozh River. An image of the residence is featured on the Belarusian 20,000-ruble bill. The two-storey palace of Field Marshal Pyotr Rumyantsev was built between 1777 and 1796 to a Neoclassical design attributed to Ivan Starov.

The Iput River is a river in Mahilyow and Homyel Voblasts in Belarus and Smolensk and Bryansk Oblasts in Russia. It is a left tributary of the Sozh River. The length of the Iput River is 437 km. The area of its basin is 10,900 km². It freezes up in late November and stays icebound until late March - early April. Its main tributaries are the Voronitsa and Unecha Rivers. The towns of Surazh and Dobrush are located on the Iput River. 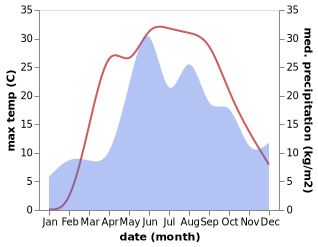