Delve into Minsk in Belarus

Minsk in the region of Minskaya Voblastsʼ with its 1,742,124 residents is a city in Belarus and is the capital of this country.

Current time in Minsk is now 10:09 PM (Sunday) . The local timezone is named " Europe/Minsk " with a UTC offset of 3 hours. Depending on your travel modalities, these larger destinations might be interesting for you: Riga, Daugavpils, Pskov, Vilnius, and Zhodzina. While being here, make sure to check out Riga . We encountered some video on the web . Scroll down to see the most favourite one or select the video collection in the navigation. Are you curious about the possible sightsseing spots and facts in Minsk ? We have collected some references on our attractions page.

City of the ex Soviet unioт ..

Notes from the road for UberNomad.com: AB Flint confronts the pomp and bombast of classic Stalinist city planning. ..

National academic theatre of Yanka Kupala (Belarusian: Нацыянальны акадэмічны тэатр імя Янкі Купалы, Minsk) is the oldest theatre of Belarus. It was opened on September 14, 1920, it is located in a building of the Minsk provincial theatre, constructed under the project of architects Karol Kozlowski and Konstantin Uvedensky in 1890 by means of donations of citizens. In 1944 has been renamed in honour of classic of the Belarusian literature, poet Yanka Kupala.

The Constitutional Court of Belarus is one of the top-tier courts in the Eastern European country. Created in 1994, the Court is run under guidelines that were issued in 1997. The purpose of the court is to render justice in areas where the constitution has come into question, such as a local law contradicting the constitution. There are 12 judges that sit on the bench, with all having degrees in legal studies, as required by Belarusian law.

More reading: Wikipedia Article
Located at 53.90 27.56 (Lat./Long.); Less than 0 km away
Tags: Universities and institutes established in the Soviet Union, Universities in Belarus

Gorky Park (парк Горького, центральный детский парк им. Максима Горького, Maksim Gorky Central Children's Park) is a public park in Minsk, Belarus. In is located near the Victory Square and the Yanka Kupala Park. The park was established in 1800 under the name Governor's Garden. During the Soviet times it was renamed "парк культуры и отдыха им. Максима Горького" (Park of culture and recreation after A.M. Gorky) after the famous Russian/Soviet writer Maksim Gorky. 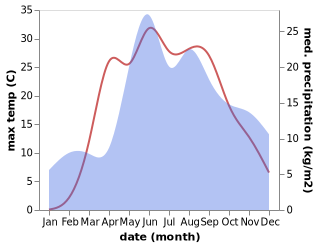