Vilyeyka in the region of Minskaya Voblastsʼ with its 30,000 habitants is a town located in Belarus - some 49 mi or ( 78 km ) North-West of Minsk , the country's capital .

Local time in Vilyeyka is now 03:03 PM (Thursday) . The local timezone is named " Europe/Minsk " with a UTC offset of 3 hours. Depending on your flexibility, these larger cities might be interesting for you: Riga, Daugavpils, Pskov, Vilnius, and Zhurikhi. When in this area, you might want to check out Riga . Are you looking for some initial hints on what might be interesting in Vilyeyka ? We have collected some references on our attractions page.

The "Vileyka" VLF transmitter is the site of the 43rd Communications Center of the Russian Navy (Russian: 43-й узел связи ВМФ России), situated west of the town of Vileyka in Belarus . The "Vileyka" VLF transmitter is an important facility for transmitting orders to submarines in the very low frequency range. Beside this, it is used for transmitting the time signal RJH69 at certain times.

Vileyka is a town in Belarus and the administrative center of the Vileyka Raion in the Minsk Region. It is located on the River Viliya, 100 km northwest of Minsk. The first documentary record dates from 16 November 1460. Time zone: II (GMT +2 hours). Population of Vileyka district in 2009: 55 thousand people (Vileyka 28.5 thousand). International phone code: +375 1771 xxxxx. Postal index: 222410. The 43rd Russian Navy's long-haul communications center is located near Vileyka .

Maladzyechna, is a city in the Minsk Voblast of Belarus, an administrative centre of the Maladzyechna district (and formerly of the Maladzyechna Voblast). It has 98,514 inhabitants (2006 estimate) and is located 72 km northwest of Minsk. Located on the Usha River, it has been a settlement since 1388 when it was part of the Grand Duchy of Lithuania. It was also home to the Cold War facility Maladzyechna air base.

Haradzki Stadium (City Stadium)is a multi-use stadium in Maladzechna, Belarus. It is currently used mostly for football matches and is the home ground of FC Molodechno. The stadium holds 4,800 people. 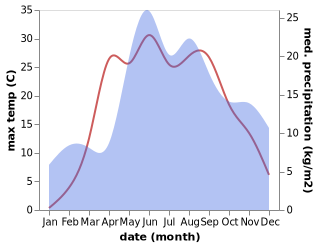