Bujumbura in the region of Bujumbura Mairie Province with its 331,700 citizens is located in Burundi and is the capital of this country.

Time in Bujumbura is now 11:12 AM (Saturday) . The local timezone is named " Africa/Bujumbura " with a UTC offset of 2 hours. Depending on your budget, these more prominent places might be interesting for you: Tabora, Mwanza, Kigoma, Kigali, and Bukavu. Being here already, consider visiting Tabora . We collected some hobby film on the internet . Scroll down to see the most favourite one or select the video collection in the navigation. Check out our recomendations for Bujumbura ? We have collected some references on our attractions page.

Many choirs from around the nation gather to sing at crusade in Bujumbura. ..

Pastor Steve gives greetings in Swahili which are interpreted in Kirundi. This was a large crusade meeting in Bujumbura, Burundi. ..

Prince Louis Rwagasore Stadium is a multi-purpose stadium in Bujumbura, Burundi. It is currently used mostly for football matches. The stadium holds 22,000. It is named after former Burundian prime minister and independence hero, Louis Rwagasore.

The University of Burundi is located in Bujumbura, Burundi. It is the only public university in Burundi. Most of its facilities are deteriorating and significantly damaged due to an ongoing civil war. In its infancy, it was owned and operated by the Roman Catholic Church. Its current enrollment is approximately 3,124.

Bujumbura Rural is one of the 17 provinces of Burundi. Former President of Burundi Cyprien Ntaryamira was born here. The province surrounds the capital city Bujumbura.

The Livingstone–Stanley Monument at Mugere in Burundi is 12 km south of the capital Bujumbura, overlooking Lake Tanganyika, and marks a location where explorer and missionary Dr David Livingstone and journalist and explorer Henry Morton Stanley visited and spent two nights on 25–27 November 1871. In French it is referred to as La Pierre de Livingstone et Stanley.

The village of Gatumba lies on the western side of Burundi, near the border with the Democratic Republic of the Congo. The place is known for a massacre that took place at a refugee camp connected to the village. 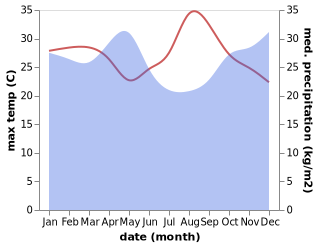