Sihanoukville in the region of Khétt Preăh Seihânŭ with its 156,691 habitants is a place located in Cambodia - some 115 mi or ( 185 km ) South-West of Phnom Penh , the country's capital .

Local time in Sihanoukville is now 09:00 PM (Tuesday) . The local timezone is named " Asia/Phnom Penh " with a UTC offset of 7 hours. Depending on your mobility, these larger cities might be interesting for you: Ho Chi Minh City, Nakhon Pathom, Bangkok, Khlong Yai, and Hat Yai. When in this area, you might want to check out Ho Chi Minh City . We discovered some clip posted online . Scroll down to see the most favourite one or select the video collection in the navigation. Are you looking for some initial hints on what might be interesting in Sihanoukville ? We have collected some references on our attractions page.

On 3 March 2011, we went to Kompong Som, which is in south-west Cambodia. We drove there from Phnom Penh and when we arrived, ate and explored the place. There were nice beaches in Kompong Som. We wer ..

Sihanoukville Cambodia a short day in port in this growing city. There were many offers of transportation mainly based on motorcycles. A growing bustling city with many sights and sounds. ..

Preview of Chrisandem's blog at TravelPod. Read the full blog here: www.travelpod.com This blog preview was made by TravelPod using the TripAdvisor™ TripWow slideshow creator. Learn more about these v ..

Mittakpheap is one of three districts in Sihanoukville, an urban province of Cambodia. According to the 1998 census of Cambodia, it had a population of 67,440.

Sihanoukville Autonomous Port or Port Autonome de Sihanoukville (PAS) is a government agency and state corporation of Cambodia and Sihanoukville that operates and governs the country's sole deep water port. Located in Sihanoukville, in Bay of Kompong Som on the Gulf of Thailand in the south of Cambodia. The port was founded in 1960 with the construction of the Old Jetty, which has four berths.

Koh Russei or Bamboo Island is one of a group of small islands in the Gulf of Thailand located about 10 km off the coast of Sihanoukville city, in southern Cambodia. For many years, Koh Russei was remarkable only as a small naval outpost. However, increasing development and rising tourist numbers in Sihanoukville brought tourism to the island.

Stueng Hav is one of three districts in Sihanoukville, an urban province of Cambodia. According to the 1998 census of Cambodia, it had a population of 13,108. 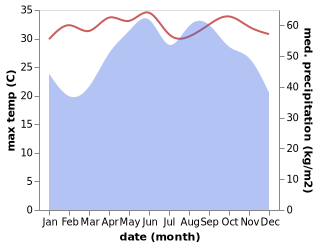