Local time in Hat Yai is now 04:20 PM (Monday) . The local timezone is named " Asia/Bangkok " with a UTC offset of 7 hours. Depending on your flexibility, these larger cities might be interesting for you: Trang, Thung Song, Surat Thani, Nakhon Si Thammarat, and Medan. When in this area, you might want to check out Trang . We found some clip posted online . Scroll down to see the most favourite one or select the video collection in the navigation. Are you looking for some initial hints on what might be interesting in Hat Yai ? We have collected some references on our attractions page.

Preview of Hanazad's blog at TravelPod. Read the full blog here: www.travelpod.com This blog preview was made by TravelPod using the TripAdvisor™ TripWow slideshow creator. Learn more about these vide ..

The Hatyaiwittayalai School is a high school in Hat Yai, Songkhla Province, Thailand

Hatyai Hospital is a general hospital in Hat Yai, Songkhla Province, Thailand. A regional hospital under the Ministry of Public Health, it serves as a referral centre for nearby community hospitals mainly within Songkhla, but also in parts of Pattani and Satun Provinces. It nominally has a capacity of 640 beds, but as is often the case with most regional hospitals, faces problems of overcrowding and is over capacity most of the time.

Hat Yai (also Haad Yai or Had Yai) is a city in southern Thailand near the Malaysian border. Located at {{#invoke:Coordinates|coord}}{{#coordinates:7|1|N|100|28|E||| | |name= }}, it has a population of 157,359 (2008) in the city itself and about 800,000 in the greater Hat Yai area. Hat Yai is the largest city of Songkhla Province, the largest metropolitan area in Southern, and third largest metropolitan area of the country.

Mahapanya Vidayalai(Nepali) महापञ्ञा विध्दालय, translated roughly as college of wisdom, is an international Buddhist school located in Hat Yai, Thailand. The college is affiliated with Mahachulalongkornrajavidyalaya University. Founded by Oou Joo Heng, Supreme Patriarch of Anamikaya and with supports of the Theravada Sangha, the school was launched in 2002.

CentralFestival Hatyai is a shopping mall currently under construction in Hat Yai, Songkhla. If all goes well the mall will open in October 2013. 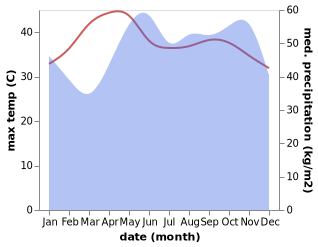