Delve into Maroua in Cameroon

Local time in Maroua is now 03:47 AM (Tuesday) . The local timezone is named " Africa/Douala " with a UTC offset of 1 hours. Depending on your mobility, these larger destinations might be interesting for you: Oure Boune, Matfay, Nanikalou, Loubour, and Garoua. While being here, you might want to check out Oure Boune . We discovered some clip posted online . Scroll down to see the most favourite one or select the video collection in the navigation. Are you curious about the possible sightseeing spots and facts in Maroua ? We have collected some references on our attractions page.

Stade Municipal is a multi-use stadium in Maroua, Cameroon. It is currently used mostly for football matches. It serves as a home ground of Sahel FC. The stadium holds 5,000 people.

Maroua is the capital of the Far North Region of Cameroon, on the Ferngo and Kaliao Rivers. The city had 201,371 inhabitants at the 2005 Census, and is a centre of cotton industry. The city also has an airport located near the town of Salak, an agricultural school, and ethnographic museum. To the North of the city is the famous Waza National Park. To the South is a large military base home to the BIR rapid intervention force. Mount Maroua dominates the skyline of the city.

Salak Airport, is an airport serving Maroua, the capital of the Far North Region in Cameroon. The airport is located about 15 km southwest of Maroua, near the city of Salak. It is also known as Maroua Airport or Maroua Salak Airport.

Mindif is a town and commune in Cameroon. 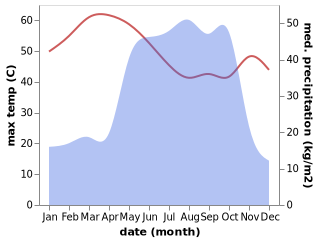